This week was full of surprises for the Boa Esperança Camp. With three of its staff members celebrating their birthday around the same date, surely we had to throw some sort of celebration! The first surprise was on the 4th of July, when Julie and Ronny were on patrol on their birthday, and they tagged the first turtle of the season in Boa Esperança 🙂

On the 6th it was Wilson’s time to celebrate so… We came in! The cake was a surprise easy to predict, but surely Julie, Ronny and Wilson didn’t expect a crowd to burst into the camp at tea time with some nice chocolate cake and cold drinks! So it was great to see their faces when a car full of people arrived ready to celebrate their birthday.

However, the biggest surprise was given by the team itself. While on censo in the nearby beach of Agua Doce, Julie and Emma Lockley came across a glass bottle freshly washed ashore with… A MESSAGE.

Of course most would think that surely these things only happen in the movies, but it was true, we were all very excited! We careful broke the bottle, to reveal the its contents.

It wasn’t as exciting as someone lost in a desert island needing help, but, you can read the message in the photo. Emma already emailed the sailors who sent the message, will let you know the outcomes! 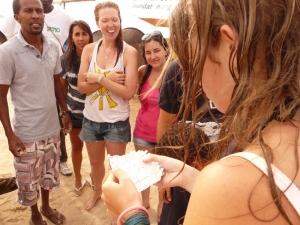 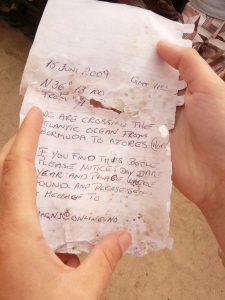