Trip report from 2 of our board members

Trip report from 2 of our board members

Two of our board members from Switzerland visited Boavista a few weeks ago and sent in this trip report:

“After working as volunteers on the Turtle Foundation board since 2006 in accounting and administration, we finally made it to visit one of our projects. For 2 weeks we stayed in Boa Vista and accompanied various people who work for our project as staff, volunteers, scientists or soldiers. We were very much impressed by the high motivation of the whole team, even in difficult conditions such as heat and bugs, electricity and water shortage.

We experienced that walking on the beach for 4-5 hours at night can be very exhausting, but to forget this one needs only a look up to the sky with millions of stars and very bright shooting stars, and, of course, when suddenly in the dark a turtle is spotted. The more experienced patrollers (of course, all of them are more experienced then we “office people”) suddenly signalled to stop and go down to the sand and be quiet. We had to wait in this position until the turtle found the perfect spot and decided to dig a nest and lay the eggs.

On our second night on patrol we felt like part of the team already, and we volunteered to be lookouts on the cliff between Lacacao and Curralito. Our task was to look out for the red lights of the patrol who spotted a turtle and then to wake up the scientists. So we did that at 2 am, except that the red lights were only a test and not a signal and there was no turtle, only very confused patrollers because suddenly everybody from the camp was at the beach! Some of them decided to sleep right there in the sand, which was wonderful under the stars and near the waves, and fortunately at 4 a.m. a turtle came and made a nest. So everybody was there when the satellite transmitter was placed on the back of the turtle by the scientists of IMF Geomar Kiel, and in bright day light we all saw her going back to the sea. And the two of us felt better because now we had woken everybody up for a good reason.

We liked the village of Sal Rei very much and walked through almost all the streets. First we saw only a few shops but then we discovered that not all the shops had signs or even windows necessarily. Behind an open door can be a grocery shop, mostly run by Chinese, or we saw somebody coming out of a door with a plastic bag and we discovered a bakery. We could not get enough looking at the long white sandy beaches with the blue sea and white waves. And we very much enjoyed meeting the friendly local people.

Much impressed and very happy we went back home and back on our computers. We are so glad to be part of this project of protecting sea turtles and we would like to thank everybody for the wonderful job they are doing.” 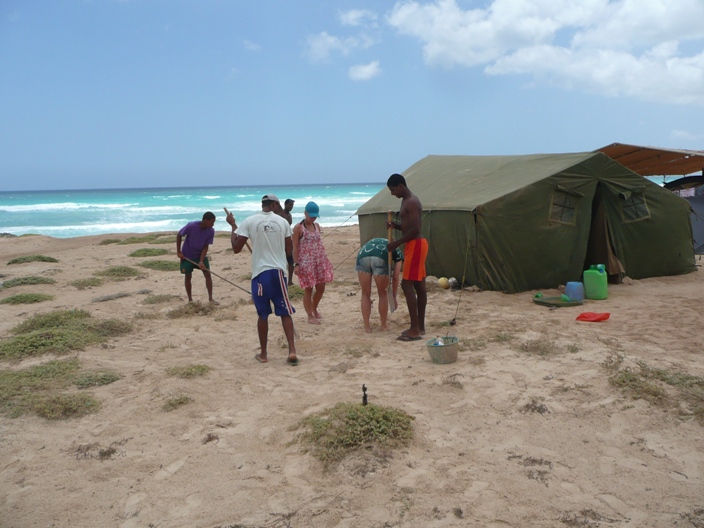 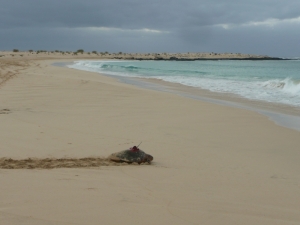