The Turtle Foundation adopted two exhibits of hawksbill sea turtles as part of the sea turtle exhibition of the Senckenberg Museum Frankfurt, Germany. Both exhibits convey an original impression of these fascinating but critically endangered marine animals. The conservation of sea turtles is a matter of heart for the Turtle Foundation – and follows the motto “people only protect what people know”. Not everybody has the opportunity to admire living sea turtles during own diving excursions.

The hawksbill turtle is one of the most endangered species of sea turtles because of their coveted turtle shell that is used to produce combs, jewelery, etc. This is now forbidden in most countries, but is still being practiced in various locations. In the course of our campaign work against the illegal use of turtle shell in Indonesia we are especially pleased to take over the sponsorship for the two hawksbill turtle in the Senckenberg Naturmuseum Frankfurt.

With this sponsorship we would like to enhance interaction between environmental education, science and active species protection. Thus, Turtle Foundations flyers are available in the information area. Moreover, the participation of the Turtle Foundation in upcoming museum events is envisaged, in order to get in touch with interested visitors.

The Senckenberg Gesellschaft für Naturforschung (Senckenberg Society of Natural Science) was founded back in 1817 by committed Frankfurt citizens as the Senckenberg Natural History Society. Today, it is one of the most important research institutes dealing with biological diversity and its Frankfurt property is one of Europe’s largest natural history museums. You find the website of the Senckenberg Naturmuseum at http://www.senckenberg.de/root/index.php?page_id=5256

Top image: Handover of the adoption certificates in front of the sea turtle showcase by the director of the Senckenberg Naturmuseum Frankfurt Dr. Bernd Herkner (right) on 3 May 2017 to our active Turtle Foundation Friends member Wolfgang Riecher. Bottom images: Adoption certificates of both exhibits. 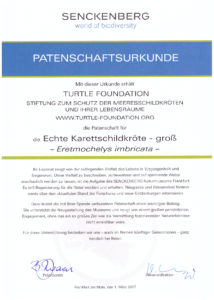 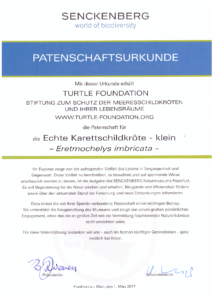