Berau: Protection of the green sea turtles and hawksbill turtles in the Derawan archipelago

The conservation project in the Derawan Islands has existed since Turtle Foundation was founded in 2000. It started began on Sangalaki Island, where a ranger station was established in January 2002 and full protection of the island’s turtle nests was granted by the authorities for the first time. This protection was enforced with the help of daily beach patrols by local rangers, who also relocated endangered nests to hatcheries, and collected data on nesting activity. In 2008, the project was expanded to include the two Derawan islands of Bilang-Bilangan and Mataha. These measures almost completely stopped illegal egg collection, and about 75% of the population’s nests were under protection.

In the following years, there were several changes in the management of the nesting islands. While conservation efforts on Sangalaki, Bilang-Bilangan, and Mataha were continued by national governmental and non-governmental organizations, in 2019 Turtle Foundation established a new conservation project on the last two until then unprotected nesting islands of the Derawan archipelago, Belambangan and Sambit. As a result, a significant conservation gap has finally been closed. On Belambangan and Sambit, all the measures for the protection of sea turtles that had proven successful on the other islands in the years before were implemented.

Unfortunately, around the turn of the year 2021/22, the local government surprisingly prohibited us from continuing the project. This is apparently due to plans for the construction of a resort on the island Belambangan, for which the interests of the nesting sea turtles are unfortunately subordinate. At the moment we are examining different possibilities: on the one hand we are investigating whether there are still chances to continue the project on Belambangan and Sambit, on the other hand we are in discussion with the regional nature conservation authority about whether we could return to our beginnings and support the conservation program on Sangalaki.

Since the project began in 2000, it has enabled the hatching of approximately 9 million turtle hatchlings, most of which would otherwise have already ended up in the cooking pots as eggs.

In addition to our activities on the nesting islands, in Berau we have continuously campaigned against the production and sale of products made from turtle shell. With persistent campaigning and reporting of violations, we have succeeded in bringing this illegal trade to an almost complete halt.

Recently, we started a cooperation to support the local population on the island of Maratua with its four villages. A staff member from our partner organization Yayasan Penyu Indonesia is now stationed in the village of Payung-Payung on Maratua to develop possible conservation activities. 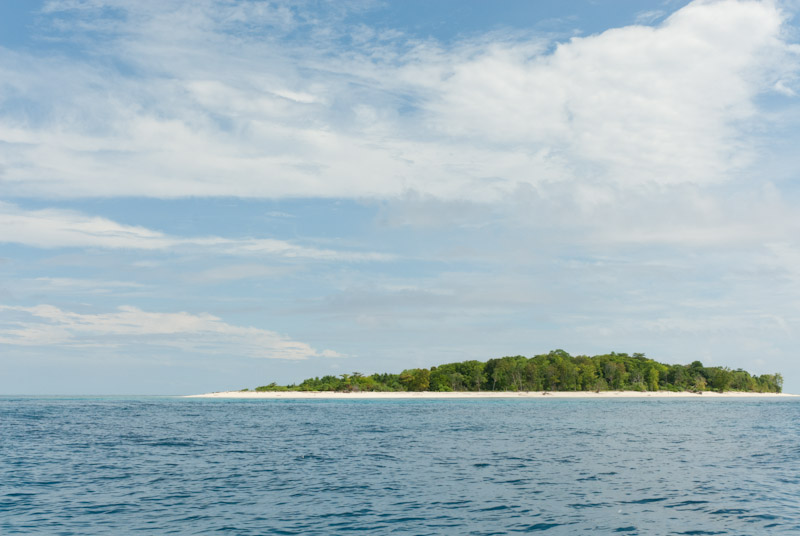 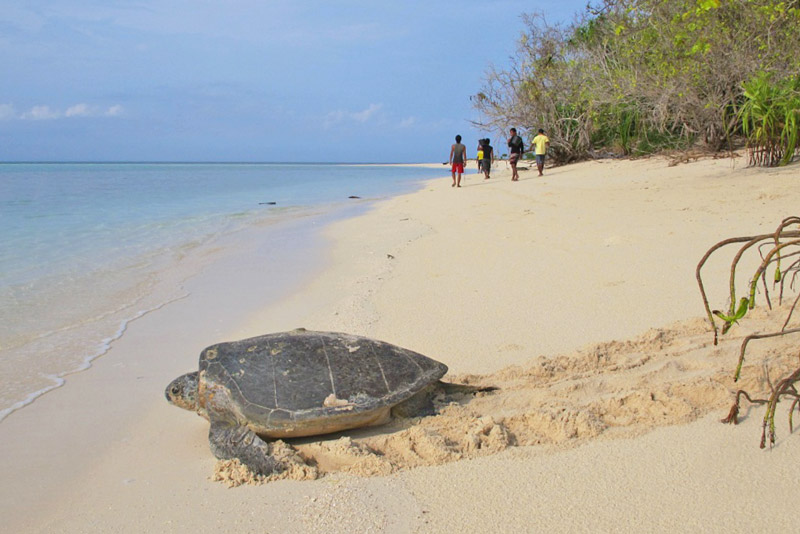 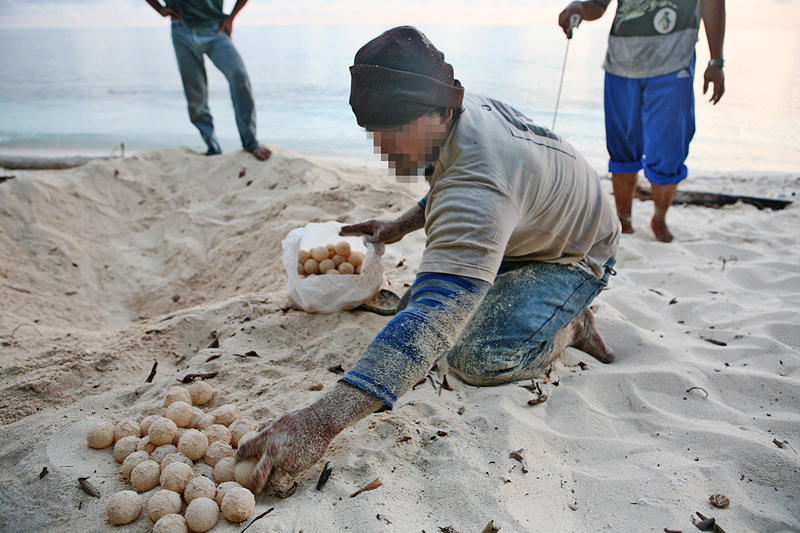 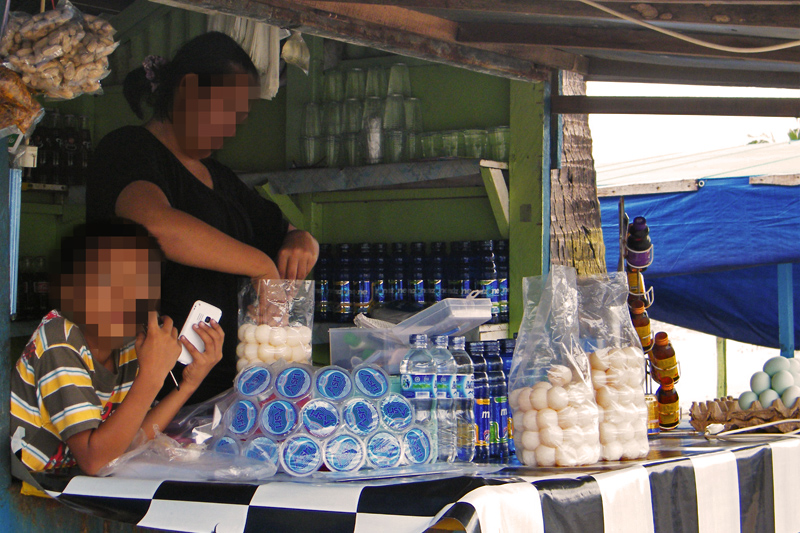 Sale of turtle eggs on a market stand in Berau 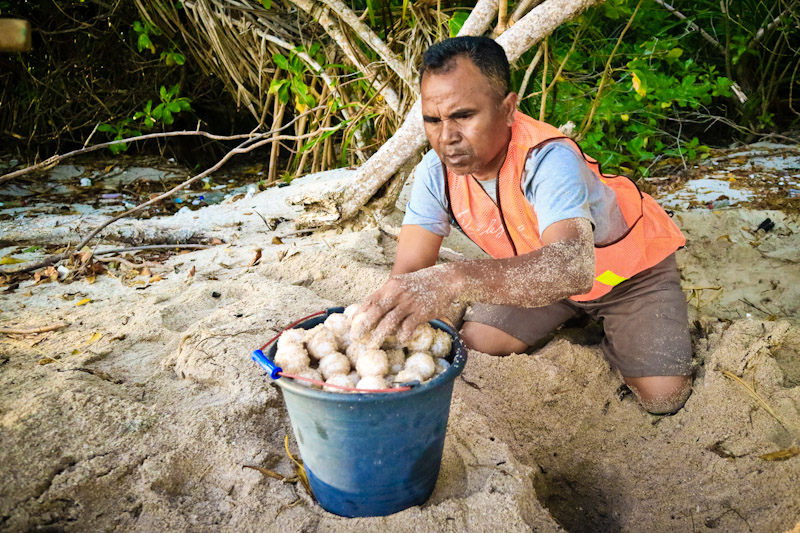 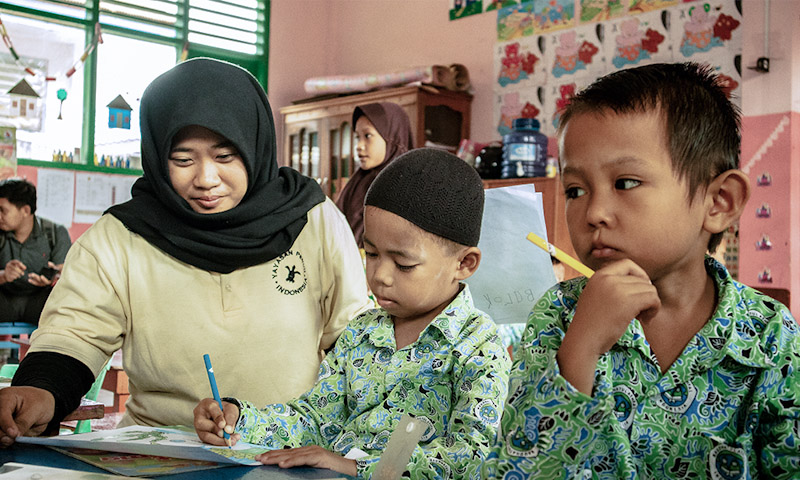 As part of an investigation into the consumption of turtle meat and eggs in the Mentawai archipelago off West Sumatra, in late autumn 2017 we discovered a nesting beach of the rare leatherback turtle (Dermochelys coriacea) on the remote island of Sipora, which had been unknown to the outside world until then  ̶  the beach at Buggeisiata. The animals nesting there belong to the subpopulation of the North-eastern Indian Ocean, about which very little is known, but which is very likely acutely threatened with extinction. Unfortunately, both the eggs and the nesting animals are regularly consumed almost completely by the local population. 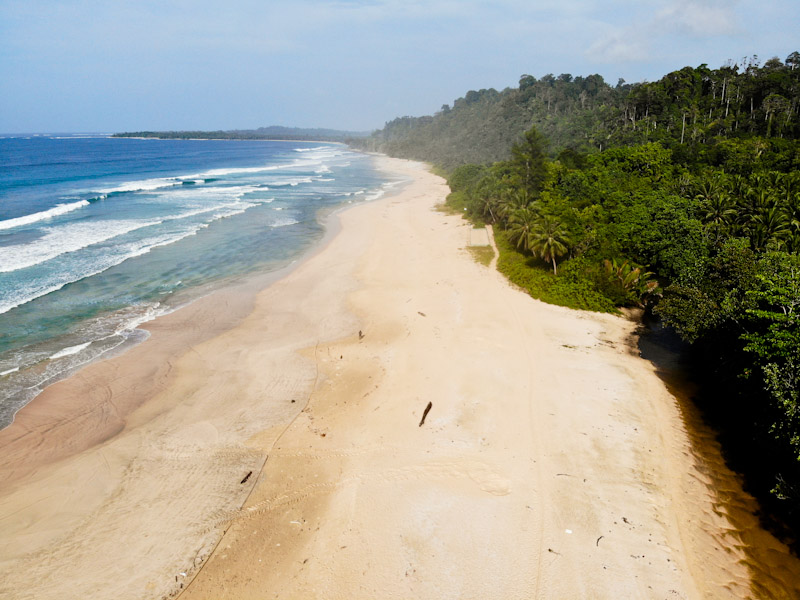 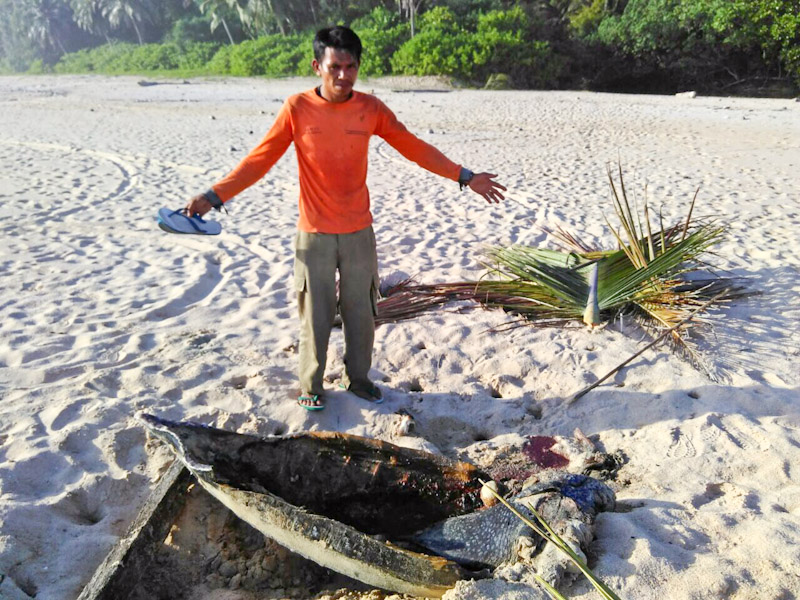 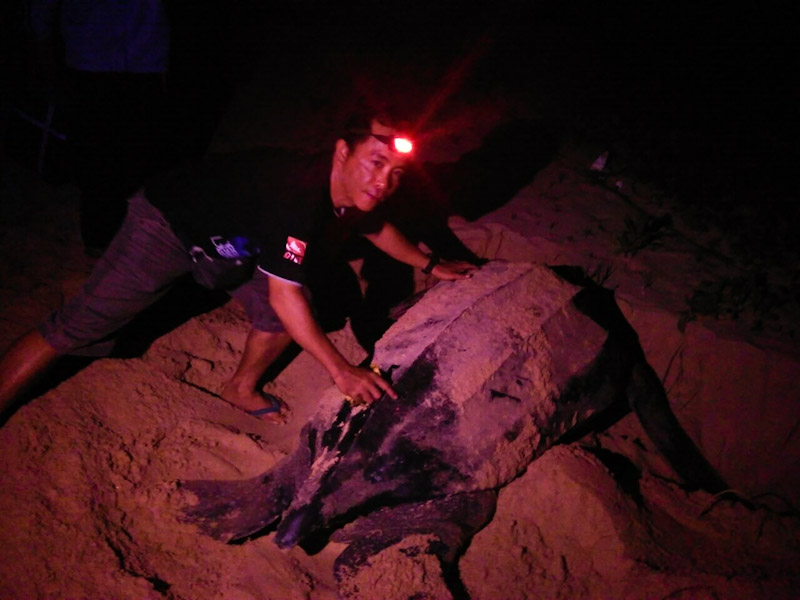 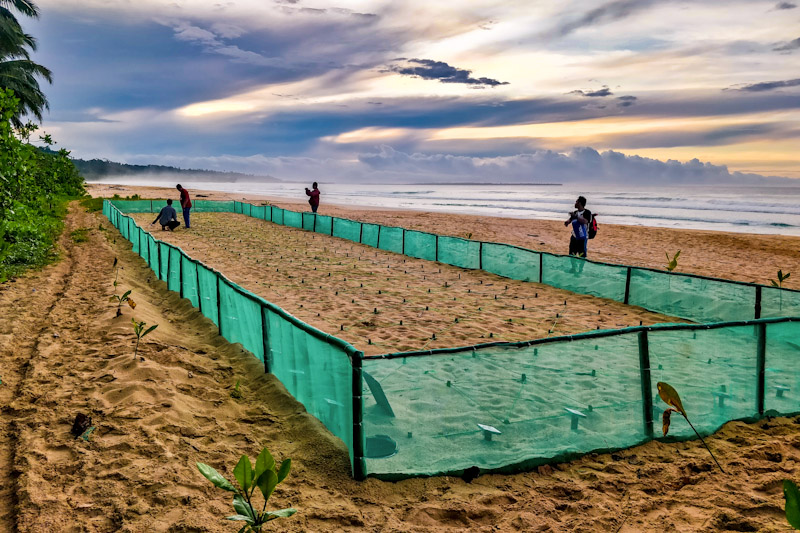 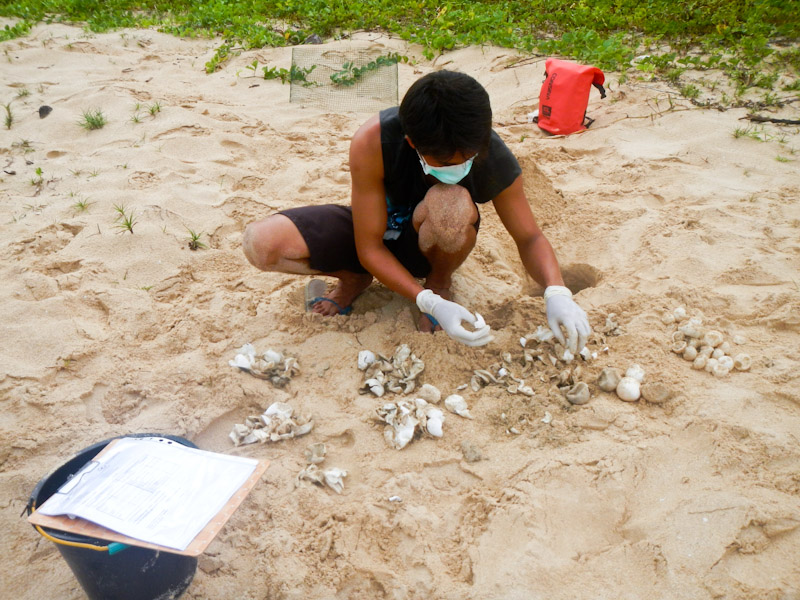 On other islands off Sumatra, we discovered further leatherback turtle nesting beaches during our surveys in the last years, which were unknown to the experts until now. For most of the beaches it is still unclear how many animals nest there per year and whether a protection project should be set up there. However, in the case of the intermittently inhabited island of Selaut Besar in the province of Aceh, the case soon became clear: leatherback turtles regularly nest there in larger numbers. During a visit on site in January 2020, we succeeded in tagging two leatherback turtles with satellite transmitters together with scientists Dr. Rita Patricio and Dr. Paulo Catry in order to obtain data on their migratory behaviour.

As the turtles‘ eggs are collected by fishermen and coconut farmers who visit the island regularly, the island‘s nesting beach needs to be protected. For this, in 2020 we established a partnership with the conservation organisation EcosystemImpact, which is based on Simeulue Island, to which Selaut Besar belongs. While EcosystemImpact is responsible for the implementation of the project on the ground, we contribute the methodology of conservation measures and data collection. Recently, we were able to start training the rangers and launch the project. 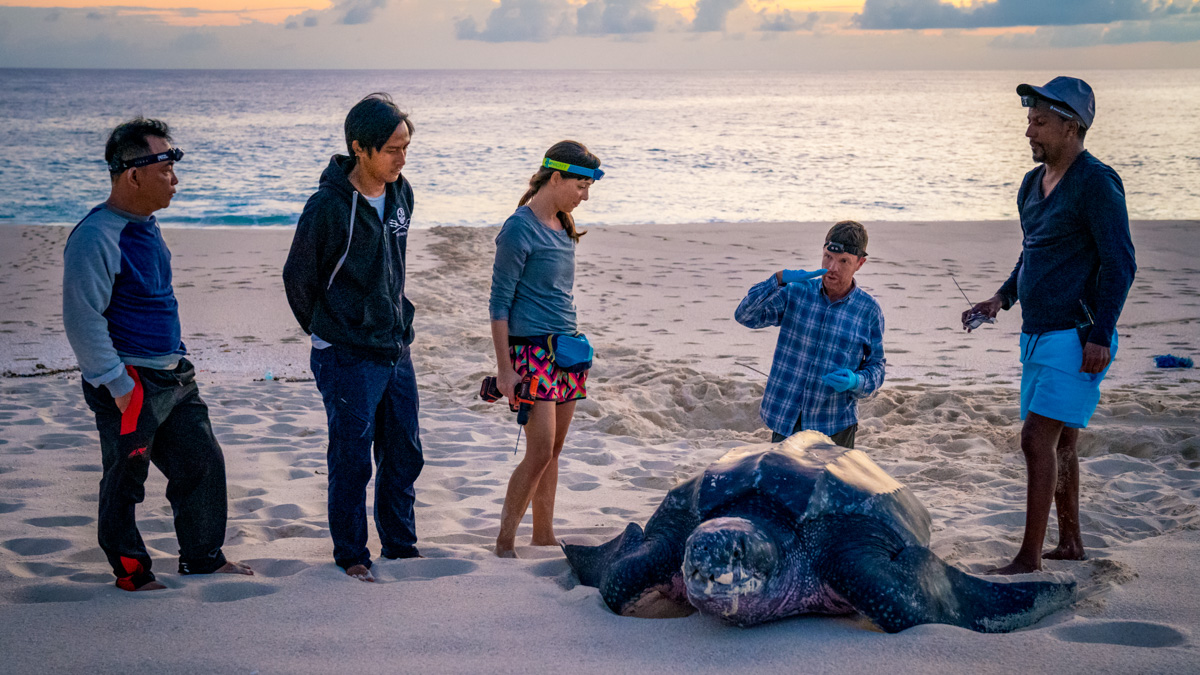 Satellite tagging of a leatherback turtle on Selaut Besar

The hawksbill turtle (Eretmochelys imbricata) is considered the most beautiful of all sea turtles because of its colourful shell. But the corneous plates of their dorsal shell unfortunately also provide a much sought-after material: the so-called turtle shell. Combs, spectacle frames, decorative objects and jewellery made of turtle shell used to be widespread in these parts of the world, too, but since the international trade in turtle shell has been banned, they are mainly found in the tropical countries where the hawksbill turtle is native.

The hawksbill turtle is heavily hunted for its turtle shell and is therefore one of the most endangered sea turtle species in the world. One of the remaining populations inhabits the waters of Indonesia. Here, too, the animals are now protected, but the problem and the extent of turtle shell exploitation have not yet been sufficiently recognised by the authorities.

To help save Indonesia’s remaining hawksbill turtles, we launched a nationwide campaign to curb the turtle shell trade, aiming to influence buyer behaviour and negatively connote the wearing of turtle shell jewellery. For the campaign, which started in mid-2019, an office was rented in Bali as an operational base.

First, however, we wanted to get an overview of the scale of the turtle shell trade, so we undertook a series of market researches during the project period, with Bayu Sandi and campaign manager Muhamed Jayuli travelling to locations we had identified as potential transshipment points and hotspots of the turtle shell trade. After visiting 16 localities in nine provinces, four regions are now in the crosshairs for further, much-needed follow-up:

Furthermore, we came across a flourishing online trade on the commonly known sales portals. Through persistent, regularly repeated reports to the operators of the portals, citing the offence of illegal wildlife trade, the number of turtle shell items on offer was significantly reduced: between the first count in August 2019 and the last count in November 2020, offers dropped by 87%.

Due to the Corona restrictions, market research could only be carried out to a limited extent, so we used project funds saved here to produce a television commercial. The entire consumer campaign was based on the use of our mascot Kimi, a young hawksbill turtle who gives a face and a voice to its threatened brothers and sisters in the sea. Kimi’s appeals not to cruelly kill marine turtles to make cheap decorative jewellery from their shells reached an audience of millions in Indonesia. On social media, radio and TV channels, the campaign contributions were noticed by a total of more than 20 million people. This was boosted by the already very high prevalence of social media in Indonesia as well as by the online times, which increased dramatically as a result of the lockdown.

Our research revealed the full extent of the turtle shell trade in Indonesia: in total, we found almost 42,000 turtle shell products at markets, in shops and on the internet, with a total value of over €340,000. Based on the calculation that the horn plates of a turtle provide about one kilo of tortoise shell material and that on average 42 products are made from one kilo of tortoise shell, we can estimate that the mass of material sighted is equivalent to almost 1,000 turtles and that the market value of a hawksbill turtle in Indonesia is about €345.

Much work will be needed to achieve the goal of ending the endangerment of hawksbill turtles in Indonesia through the trade in turtle shell.

The project was carried out in cooperation with the Indonesian nature conservation organisation Profauna, the US American campaign “Too Rare to Ware” and Indonesian authorities. 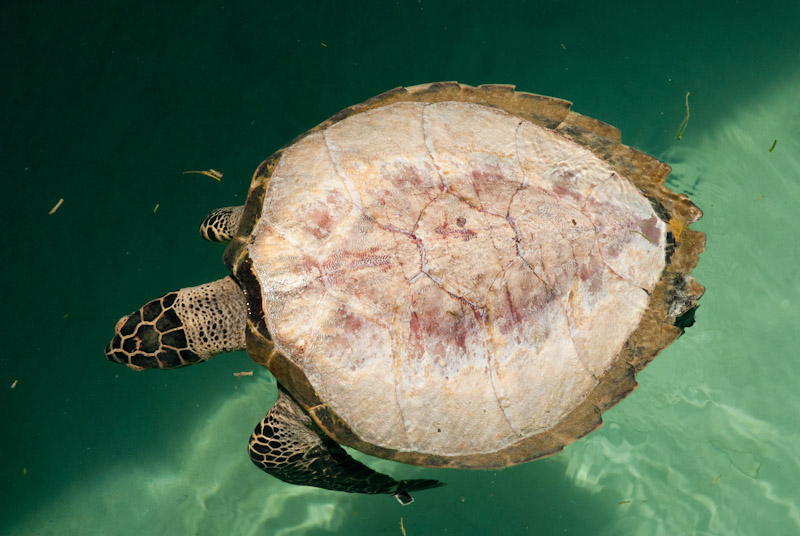 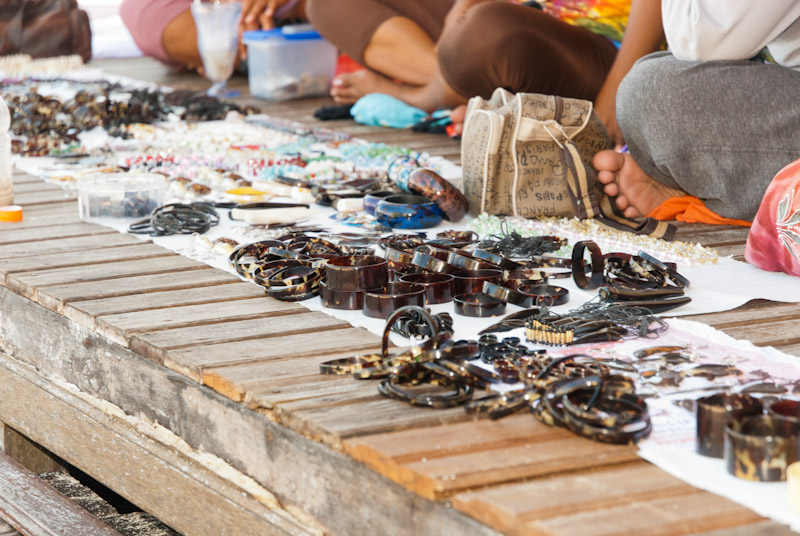 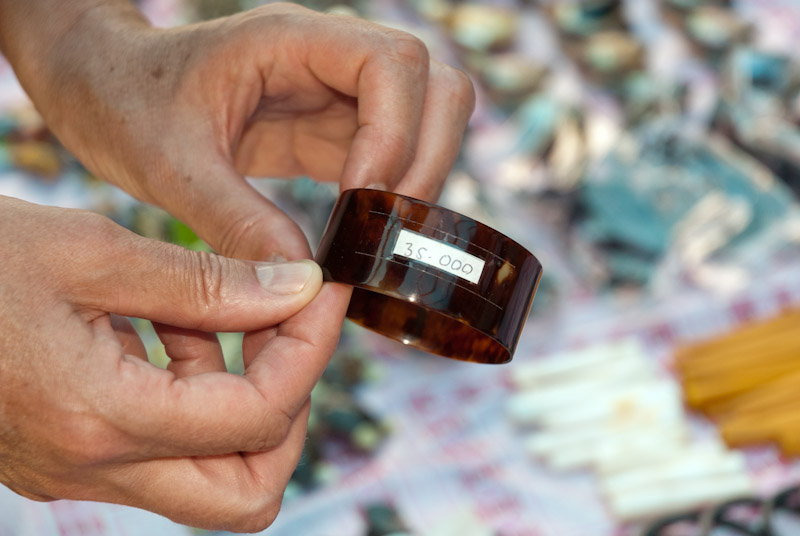 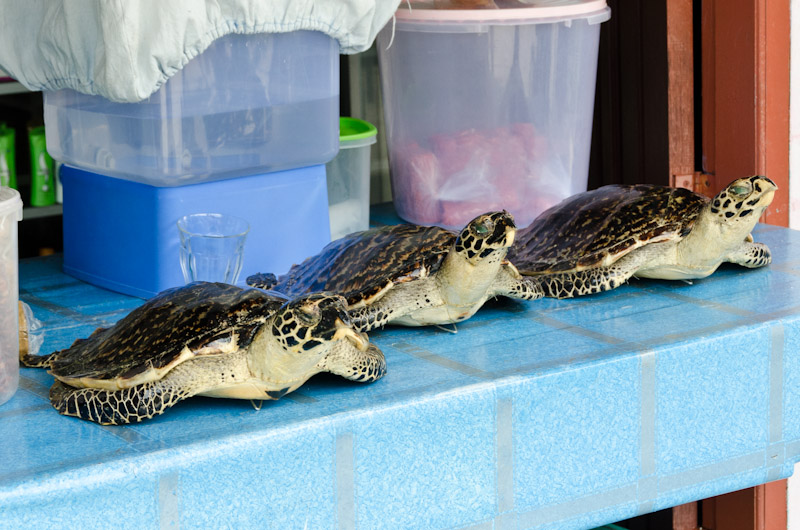