The Turtle Foundation welcomes two new “collaborators”: Karetta and Kelo, two young, lively Labradors, who will support our team on Boavista as conservation dogs from June 2018 on. They were born on 13 June 2017 in the renowned Slovakian kennel Aguzannis and are currently in the care of the Swiss dog trainer Marlene Zähner, who prepares them with playful training for their future tasks in the service of protecting the endangered sea turtles. 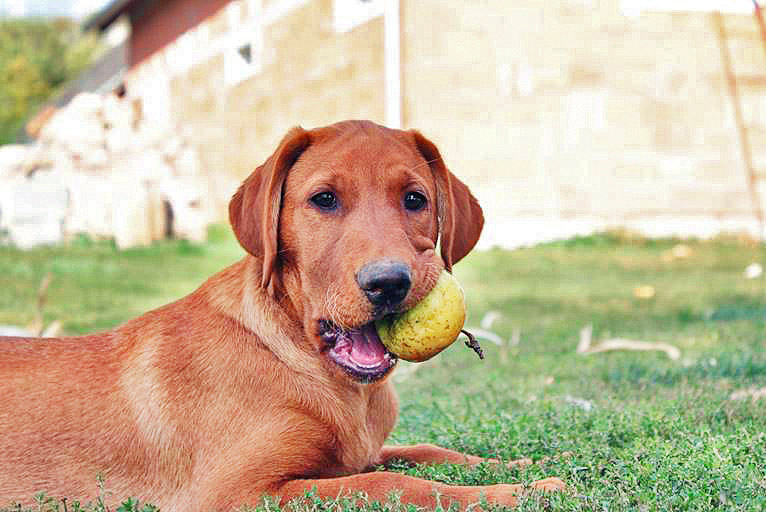 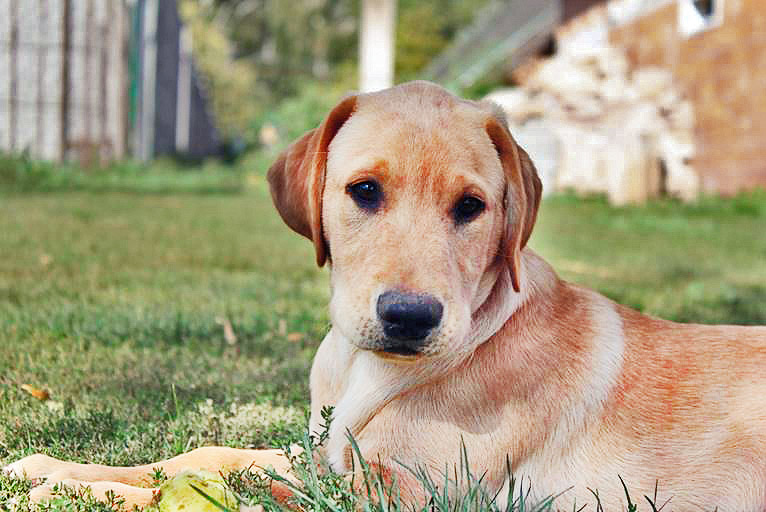 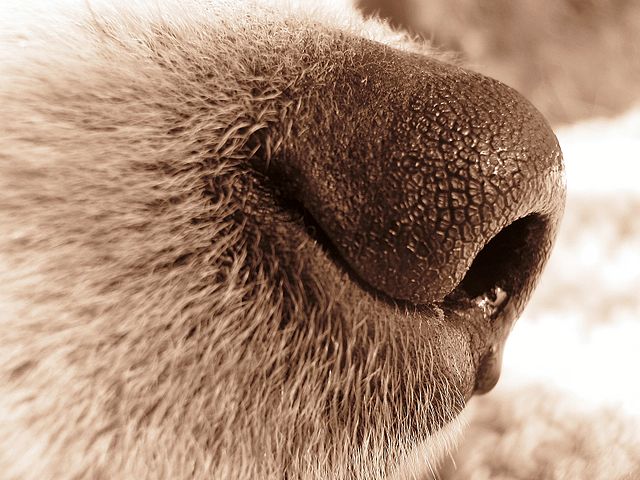 A dog’s nose: Not only the 10-20 times higher number of olfactory receptor cells than can be counted in humans is explaining the millions of times higher performance of the dog’s olfactory sense, but this is also an outcome of the dog’s specialized brain. Image: By Elucidate – Own work, CC BY 3.0

Dog noses are incredible: The dog’s olfactory sense is able to discern much more different odors and much smaller odor concentrations than we can. Dogs can even recognize whether a person has diabetes, just to give one amazing example amongst many. With their super noses, dogs live in a very special sensory world that is largely different to ours. However, with its additional ability to combine spatial and temporal traits this world is at least as complex as ours, which is mainly determined by light, colors, and shapes. Humans are utilizing the dog’s special potentials already for a long time, e.g., for finding and tracking hunting game. In today’s times, dogs are also trained for finding victims of avalanches or earthquakes, or are used by police and customs to find drugs and explosives, just to name a few examples.

Recently, dogs are also playing an increasingly important role in nature protection and species conservation, where they are engaged for various tasks. For example, dogs are trained to recognize tracks and other traces as are feces, hairs, and feathers of threatened animal species. This way, the occurrence and abundance of these species in distinct areas can be explored much easier than with conventional methods, which enormously helps in research and in finding suitable protection strategies.

Sometimes however, it is simply necessary to directly retrieve specimen of endangered species in order to rescue them from construction work or other imminent threats. Such an operation was first documented in the late 19th century, when dogs were used in New Zealand to find kiwis and kakapos in order to move them to an island free of predators. Today, customs authorities all over the world are increasingly training dogs to detect contraband such as ivory and rhino horns in cargo and luggage at airports and ship ports. 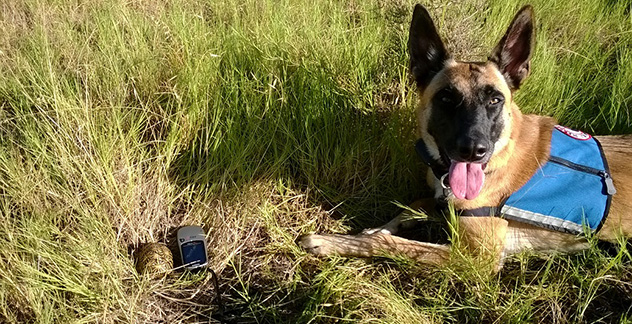 The Belgian shepherd Brin helps to find critically endangered geometric tortoises in South Africa. The dog helps in analyzing the existing population and in rescuing specimen of these extremely rare animals from construction areas. Image: CapeNature

By engaging Karetta and Kelo, we are starting to employ conservation dogs to even better protect the endangered loggerhead turtles on the Cape Verde island of Boavista from poachers. A major reason for this is a weak spot of our otherwise very successful nighttime beach patrols: In the dark, poachers can easily hide behind the dunes in the landwards areas of the beaches and wait until our patrols have passed by. Poachers have learned in the meanwhile that a certain amount of time passes before a patrol returns, and they try to use this time to clandestinely catch turtles coming ashore for nesting.

Although all nesting beaches are patrolled completely several times a night, it is simply impossible to be everywhere at the same time on those spacious areas. This is where our dogs will kick in: Together with their specially trained dog handlers, the dogs are supposed to accompany the patrols and search the landwards areas of the beaches in zigzag mode. In case of finding people there, the dogs would signal this incident by barking, of course without interacting with the people or getting too close to them. The dog handlers and patrols will then investigate the situation and, in case they suspect poaching activity or find evidence of poaching, they will take videos and photos, and will secure evidence for a report and for prosecution. Of course, direct contact with the poachers will be avoided, unless police forces with appropriate powers accompany the patrols. However, the poachers’ activities will be massively disturbed, and any suspicion of poaching will be, of course, immediately brought to the attention of the authorities and documented by evidence gathered on location.

Canto beach in the northeastern part of Boavista. Dunes and bushes offer numerous hiding places for poachers, where especially at night they are very hard to detect without the use of search dogs.

A second important task will be the detection and documentation of such cases of poaching that perhaps cannot be prevented even with increased anti poaching activities. By searching the dunes during the day, remains of poached turtles or other indication of poaching activities, such as blood, tools that have been left, or traces from a turtle that has been dragged to an already departed vehicle, will be detected and reported to the authorities. By regularly reporting well documented incidents, the general awareness of the authorities on the poaching problem will be increased, and areas that are particularly vulnerable to poaching can be identified and then even better monitored. Last but not least, it is also planned to engage the dogs at Boavista’s airport and ship ports to track down smuggled turtle meat. Further, our dogs are supposed to support our public relations and children’s environmental education activities, since Labradors are a very friendly, lovely, and popular dog breed. 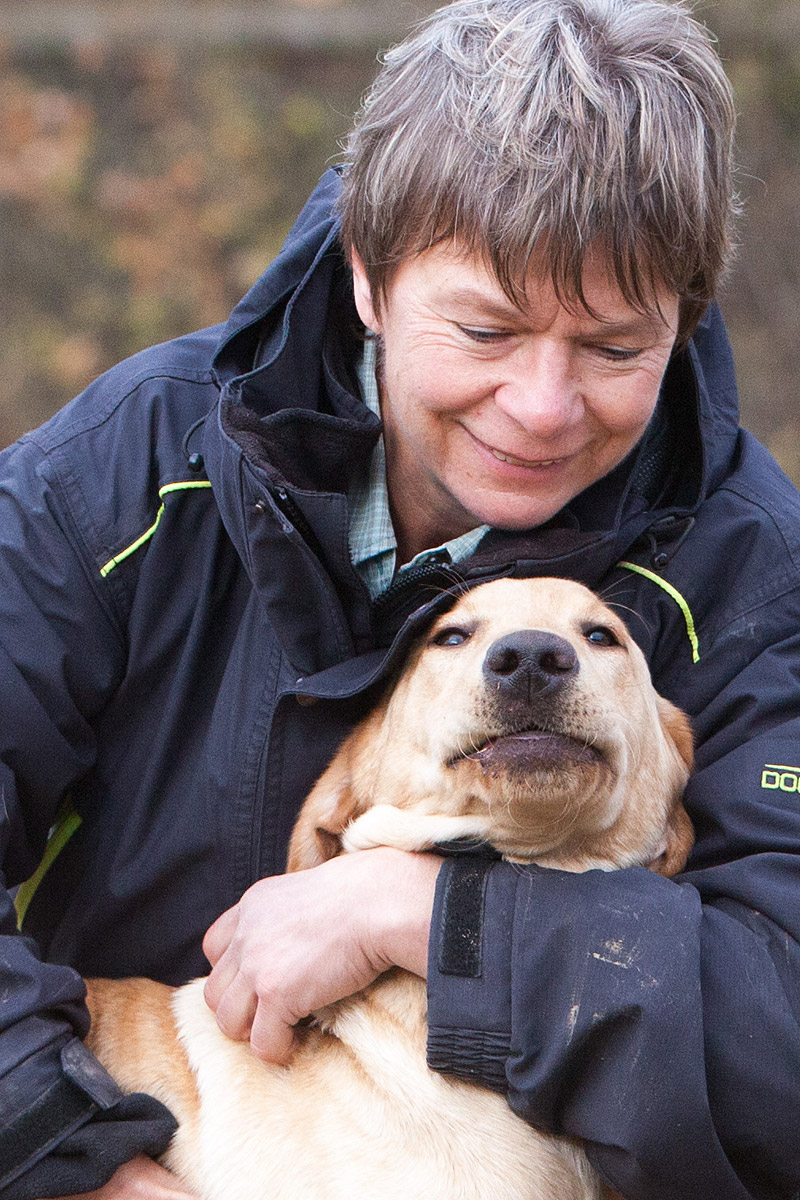 We are extremely pleased that we were able to engage the well-known Swiss dog trainer Dr. Marlene Zähner for the training of our conservation dogs. Ms. Zähner is a veterinarian but additionally, she specialized in dog training, particularly for conservation dogs. In 2014, she founded the organization “DodoBahati – Foundation for the Protection of Remaining Wildlife”. In many of the projects of DodoBahati conservation dogs trained by Ms. Zähner are successfully engaged, as is in the Congohound project, which is combating poaching on mountain gorillas and forest elephants in the central African Virunga national park. Ms. Zähner visited our project on Boavista in September 2017 to collect the necessary information and feeling for developing the right strategies on site. After her return to Switzerland, she became aware of a litter of a very successful Labrador working breed, which is bred in the kennel Aguzannis in the Slovak Republic run by Ms. Anastázia Guzanová with deep dedication and commitment.

From this litter, a pair of siblings was chosen. Soon later, at the age of about four months, the dogs were brought to the Swiss animal welfare and training center “FarmersPlace” near Basel, which is operated by Ms. Zähner. There, the two Labradors got their final names, which are based on the most common sea turtle species in the waters of Cape Verde: Karetta (Caretta caretta, loggerhead turtle; original name assigned by the breeder: Chleo) and Kelo (Chelonia mydas, green sea turtle; original name: Chipdale). Now, Karetta and Kelo have reached their boisterous adolescent age, and are receiving their basic education at FarmersPlace. The training emphasizes on the playful drive and working enthusiasm that is part of the Labrador’s character, and skillfully directs these properties towards the objectives to be learned. 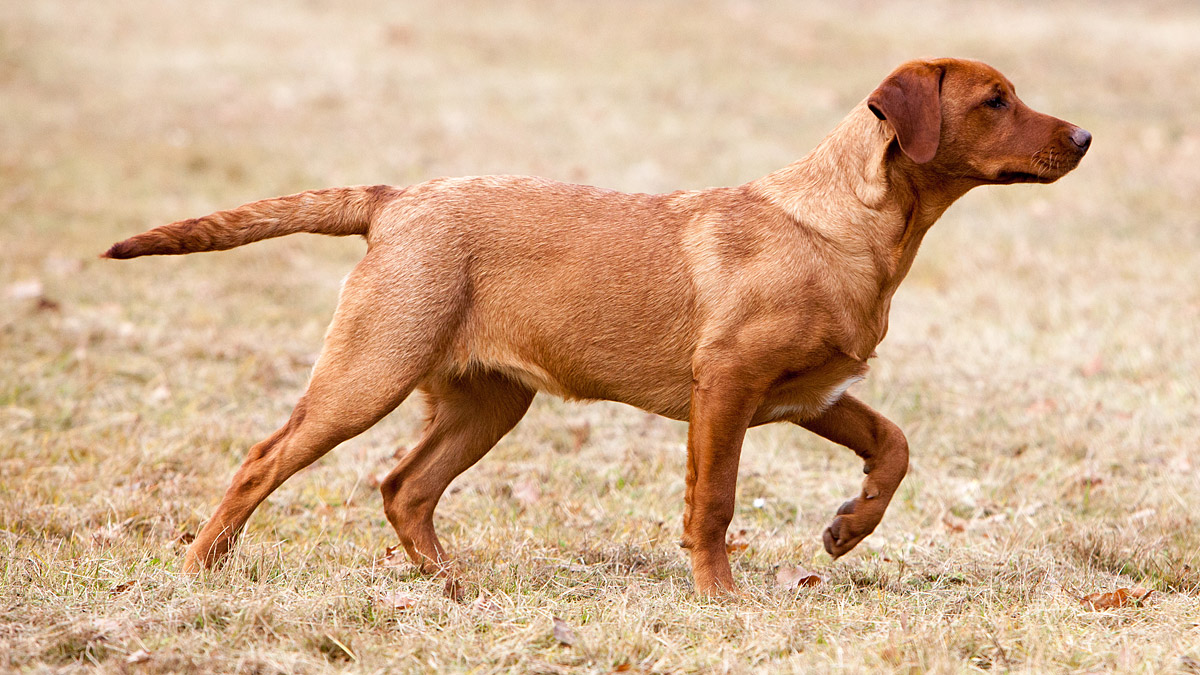 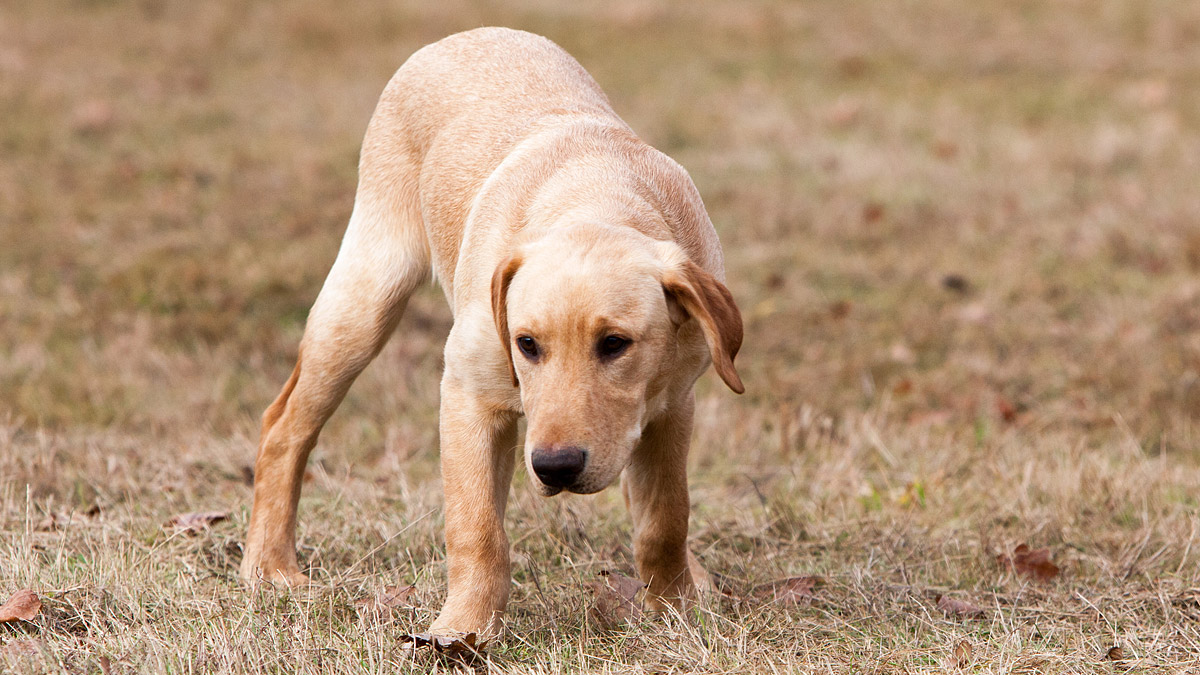 Karetta and Kelo on the grounds of the animal welfare and training center FarmersPlace end of November 2017. Images: Hiltrud Cordes / Turtle Foundation

However, the dogs are only half the battle, the success of their mission depends just as much on the dog handlers. We are therefore very happy that among our most reliable rangers we have found two great candidates who have the necessary skills, interest, and dedication to take over this responsible task: The Cape Verdean residents Valdir Santos and Ivan Lima will travel to Switzerland for four weeks in spring 2018 to be trained as dog handlers, and to get dogs and trainers familiar with each other and with their new tasks. Afterwards, Marlene Zähner will bring Karetta and Kelo to Boavista for another four weeks training phase, at which end the dogs will be committed into the hands of their dog handlers. In their first turtle nesting season, as one-year-old dogs Karetta and Kelo will not yet have the full strength to accompany the patrols every night for several hours, but they will be able to begin their task as surface search dogs.

Karetta and Kelo are expected to spend the rest of their lives on Boavista to work with their dog handlers in order to help ensuring the survival of Boavista’s endangered sea turtles. Of course, appropriate accommodation and ongoing veterinary care will be continuously provided. The dogs will always be under the supervision of Marlene Zähner and the Turtle Foundation, and will return to Switzerland or Germany in case of illness, injury, or failure of the project. However, we are very confident that Karetta and Kelo as well as their human companions will be a big gain for the turtle conservation efforts on Boavista, and we are looking forward to their first operation in the nesting season 2018. 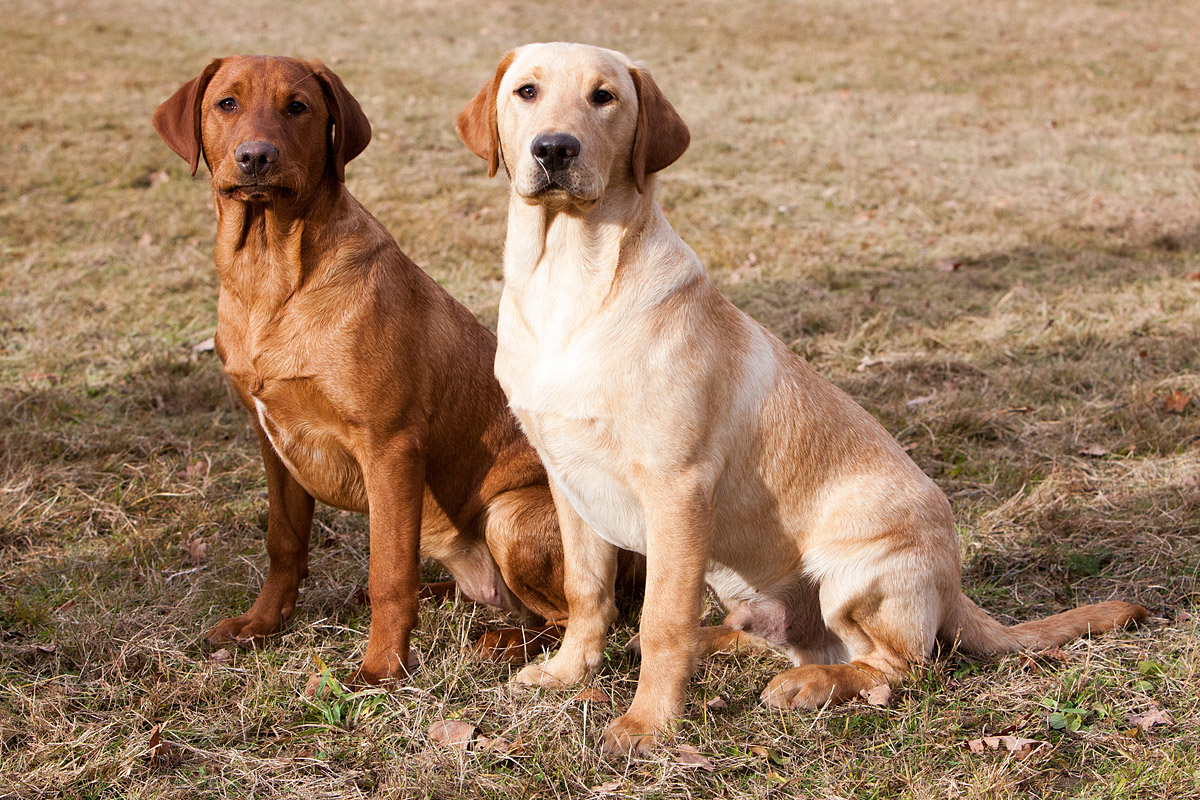