Did you know that today is World Turtle Day? This special day was initiated by the American Tortoise Rescue, an organization dedicated to the rescue, rehabilitation, and protection of tortoises and turtles, and announced in 2000 by the Humane Society International, the largest animal welfare organization worldwide. This day should remind us all of the myriad dangers that threaten one of the oldest groups of animal species in the world. The World Turtle Day is thus a good opportunity for us all to think about how we can actively contribute to the protection of the endangered sea turtles.

Every year millions of tons of waste are littered into our oceans, either disposed directly into the seas or floating through our river systems. Sea turtles often mistake plastics as food, and thousands of turtles die annually from plastic intake. Garbage on the beaches poses a major threat to nesting female turtle and hatchlings. Please never leave trash at the beach; never dispose of plastic or other waste into the sea or rivers. If you encounter particularly problematic items such as fishing lines and nets while walking on the beach, please consider taking them with you and disposing of them safely. 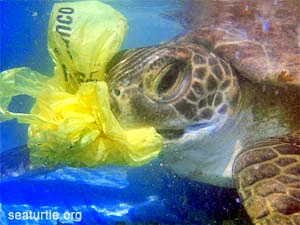 Please do NEVER buy any products made from sea turtles. This especially applies to jewelry made of turtle shell and stuffed sea turtles that unfortunately are still offered in many countries despite it being generally illegal there. Primarily hawksbill turtles are used for this purpose, resulting in hawksbills being particularly threatened with extinction. Be careful because some vendors are even pretend to tourists that their turtle shell bracelets and keyring pendants were made from legal materials! Please refrain from buying any turtle products; importing turtle shell products is prohibited in virtually every country, and can also cause a great deal of trouble at airport customs. The indicated turtle shell bracelet was offered for only 35,000 Indonesian rupiahs (about 2.30 € or 3.00 US$) – still no bargain because to make this product highly endangered animal was killed, and substantial fines would await you at customs.

Bracelet made from the shell of an endangered hawksbill sea turtle illegally sold on a market of the Island of Derawan, East Borneo

Perhaps you are fortunate enough to spend your holiday at a sea turtle nesting beach. Please look for a hotel that considers the needs of the turtles. Especially critical is the beachfront lighting, which should be minimized as much as possible. Turtles generally hatch at night and find their way to the sea by using light and reflections from the moon and the stars. Unfortunately, they are seriously disoriented by artificial light – they run in the wrong direction and then often die from desiccation or predation. Adult sea turtles, however, are deterred by artificial light from nesting. Local conservation organizations services are happy to provide you with information how you can further help the turtles and how to behave appropriately in order to not to disturb the turtles.

Maybe you are eager to volunteer in a very successful sea turtle conservation project? We still have vacancies for dedicated helpers on Boavista, Cape Verde. Please apply as soon as possible!

Please also consider a donation, which will be used to the full extent for the protection of our sea turtles. Every Euro/Dollar makes a difference!

Thank you very much for your invaluable help, because indeed every day is turtle day!