Start of the nesting season 2018 on Boavista, Cape Verde

It’s the kick-start of the 2018 season for Turtle Foundation in Boa Vista and it’s going to be a great year for us here in Cape Verde! We started with the addition of two new vehicles to our fleet, a new Toyota Hilux and a FUSO truck, much needed to improve our capacity to reach the camps with supplies. 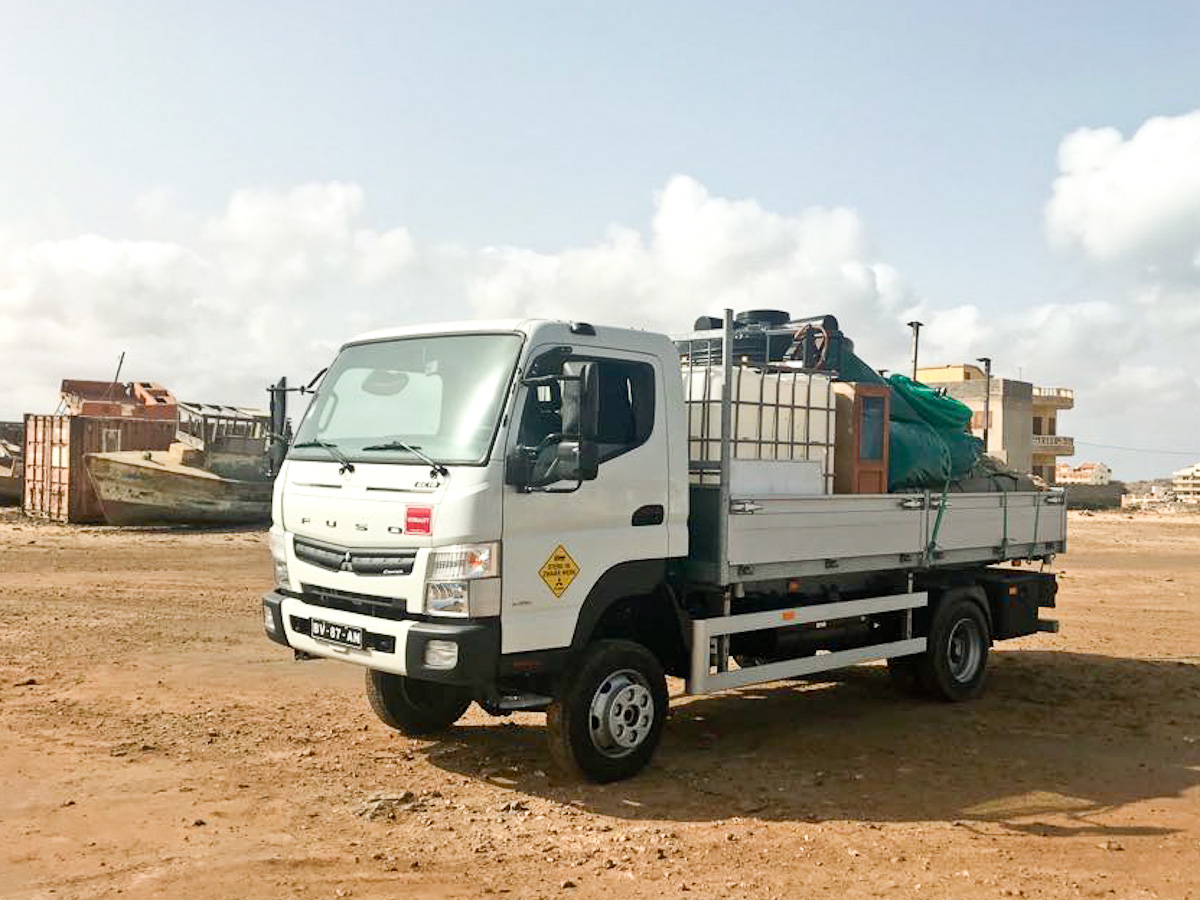 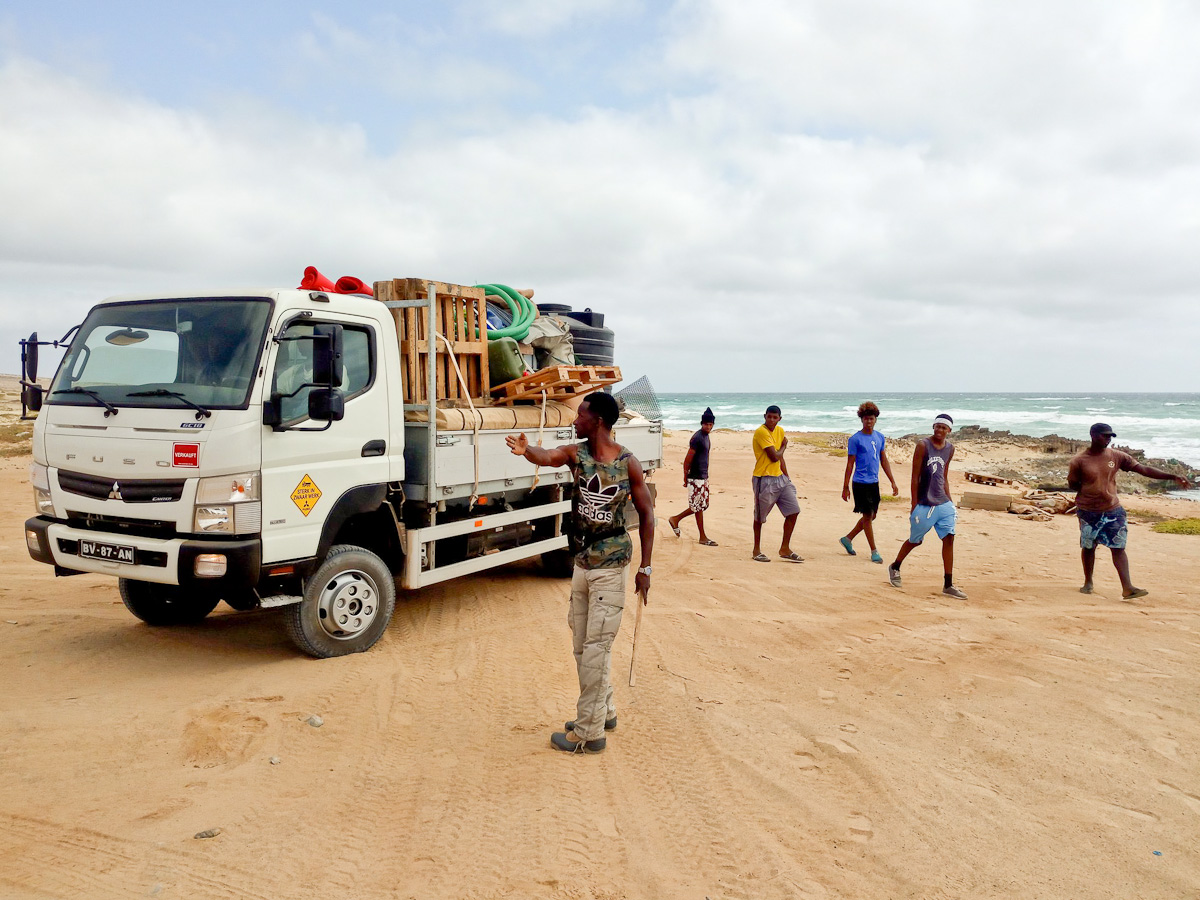 Arrival at Boa Esperança camp; no chance without four-wheel drive.

Getting things from Germany to Boa Vista it’s quite an operation that starts with getting all the documentation needed to off load and open the container, then getting all the manpower and vehicles needed to transport everything, and on top of that quite a bit of the process doesn’t depend on us but rather on local bureaucracy! With hard work we managed to get everything sorted and packed in our new warehouse where it can be processed and ready for the season. Boa Vista is a remote place and it’s not easy, or cheap, to find all the materials and supplies we need – so every year during the off season we perform a massing shopping session lasting several weeks! It’s always a huge operation, logistically and financially, but essential and allows us to do our job during the nesting season of the loggerhead turtle in Boa Vista. 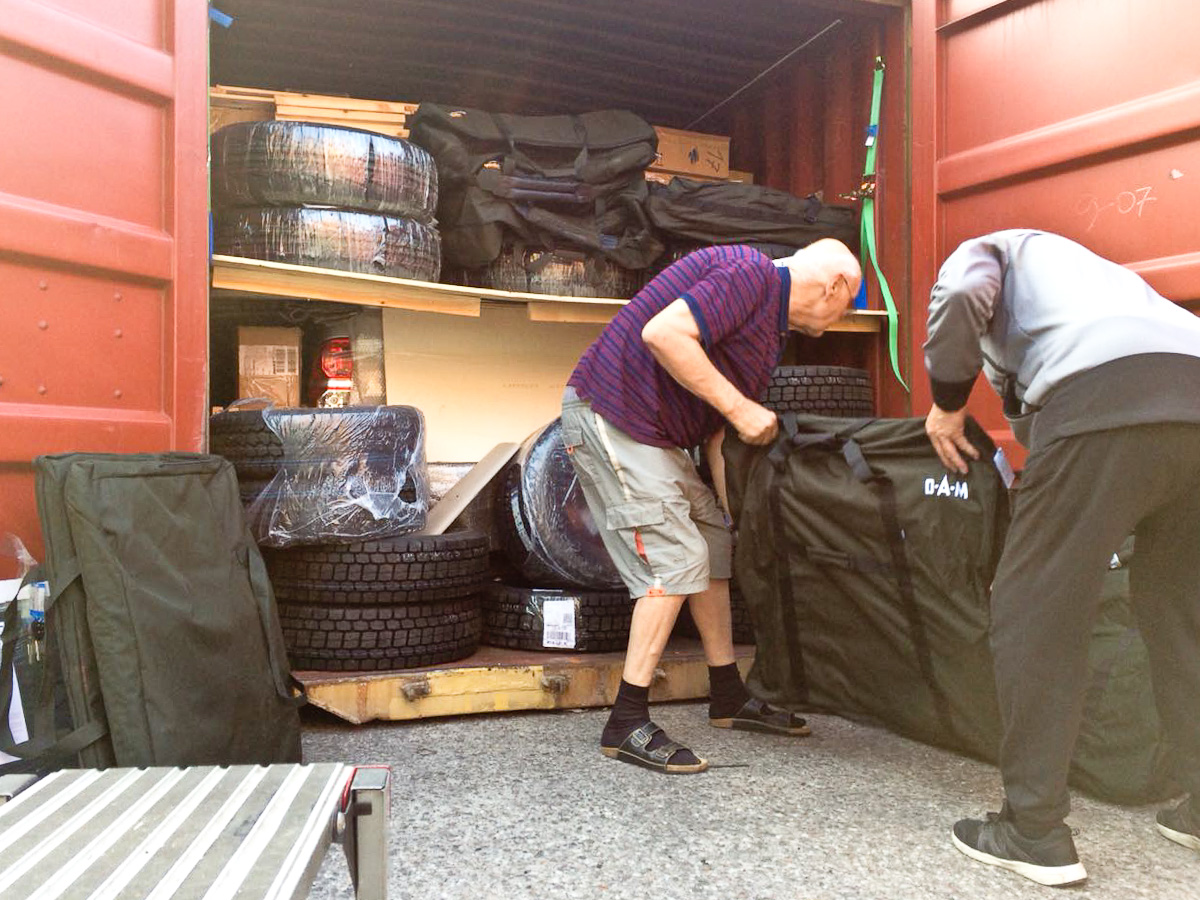 The next step is getting the teams ready to start building the camps. This year we kept the same 5 camps as before, named after the beaches where they are located: Boa Esperança, Canto, Cruz do Morto, Curral Velho, and Lacacão. The materials were prepared and packed and on the morning of the 21 May, a large team of rangers and office team members departed Sal Rei on the way to Norte, with (literally) a truckload of stuff! The first camp was Canto and after a few setbacks, a “rusty” team man-aged to get everything ready! Over the week we built Cruz do Morto, a smaller camp but on a key beach which allow us for a more effective protection of that area, and Boa Esperança, including the hatchery! The following week it was time to work on Lacacão and Curral Velho camps, all across the island! It’s a lot of work, with some blood, sweat and tears in the mix. Then some screaming and shouting, and laughing and cheering. Slowly but surely, we successfully put all the camps operational and ready for the season. Let’s go!

Übrigens: By the way: From June on during the nesting season, every two weeks now publish our Boavista newsletter Turtle Times with latest reports from our project. The issues for the 1st and 15th of June as well as older issues are now available on our download page. 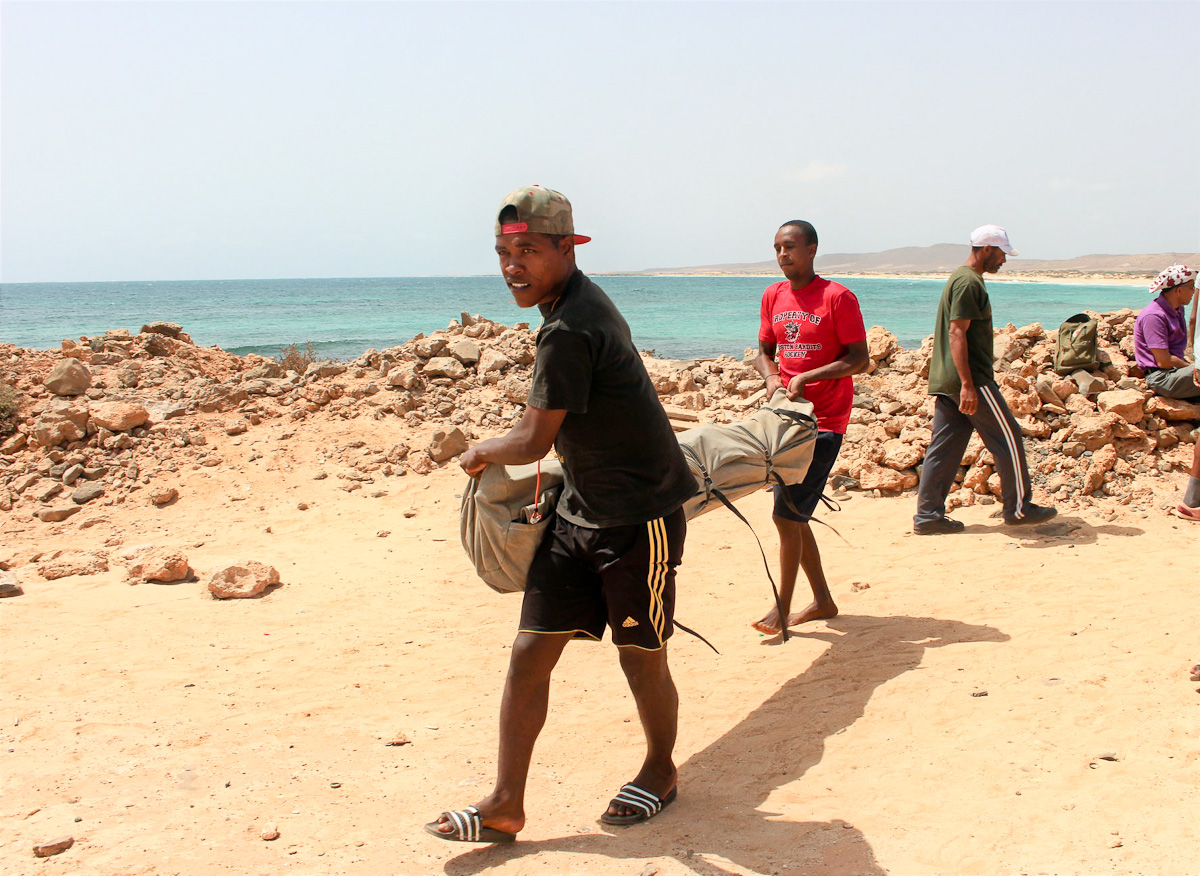 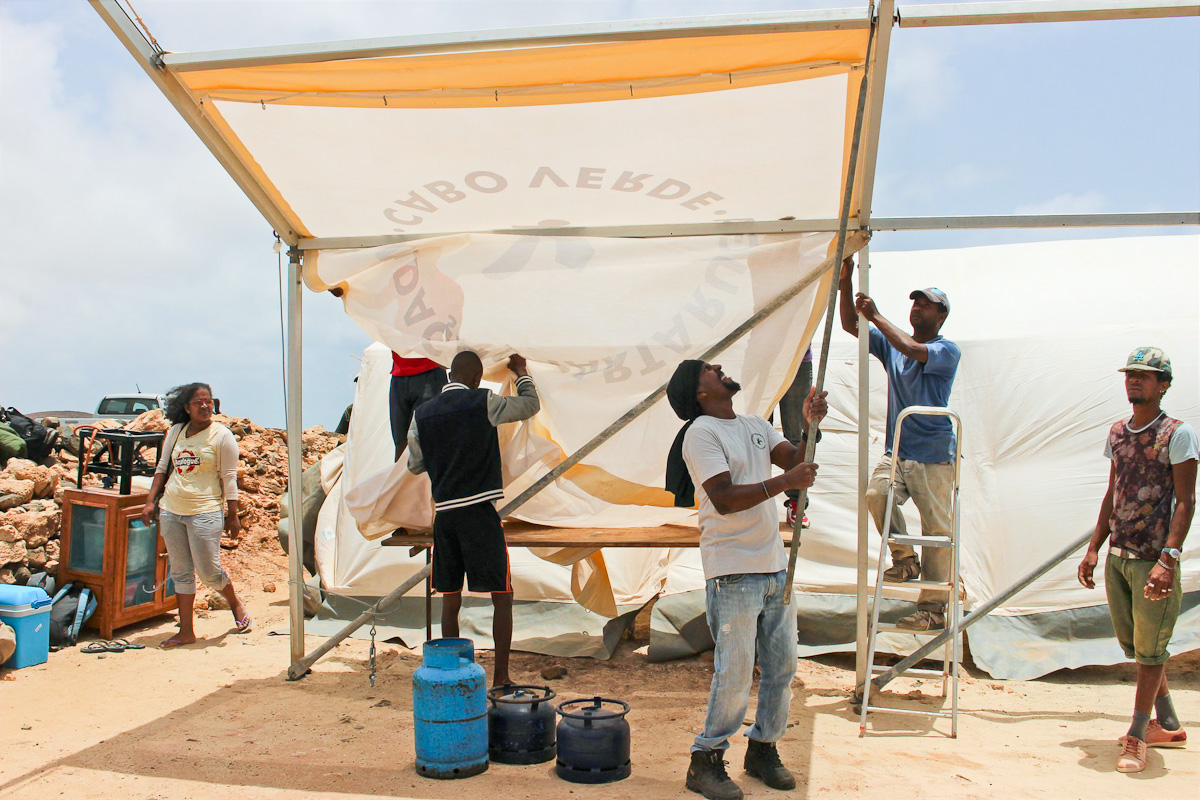 Camp Canto: Setting up the shadow tents with logo roofs 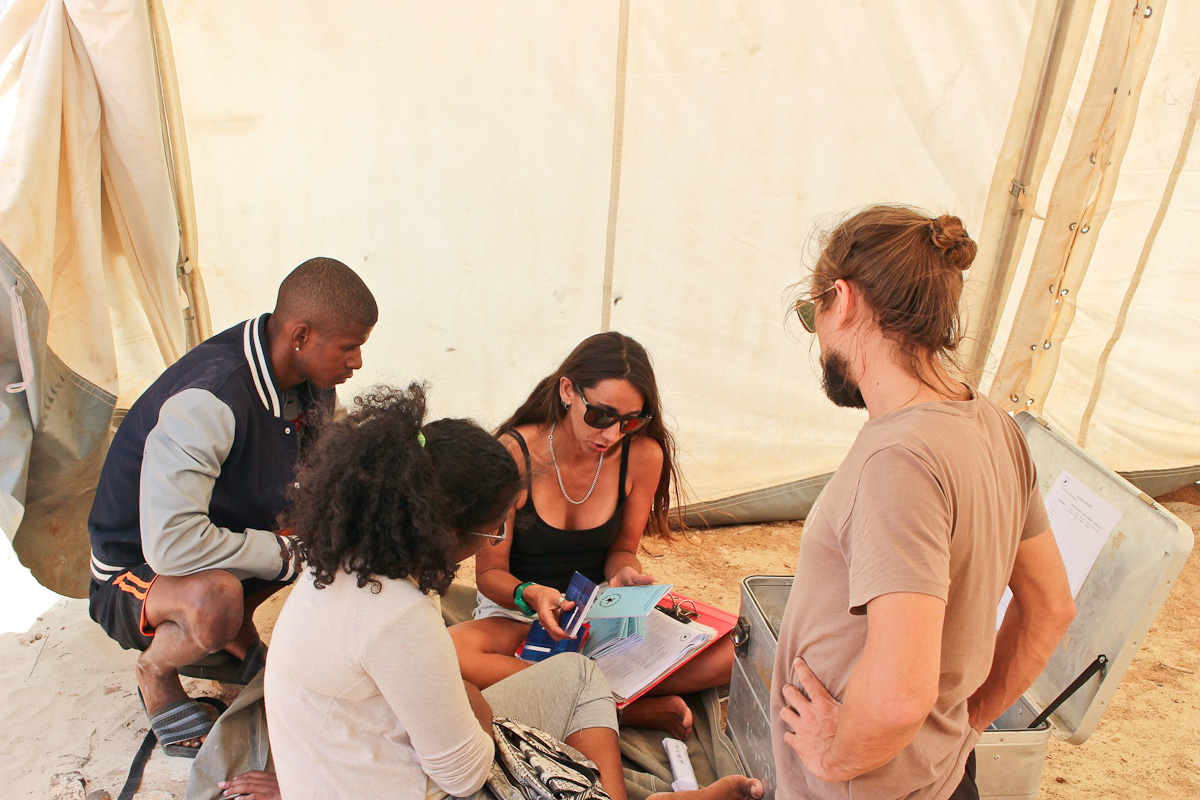 Camp Canto: Briefing of the coordinators 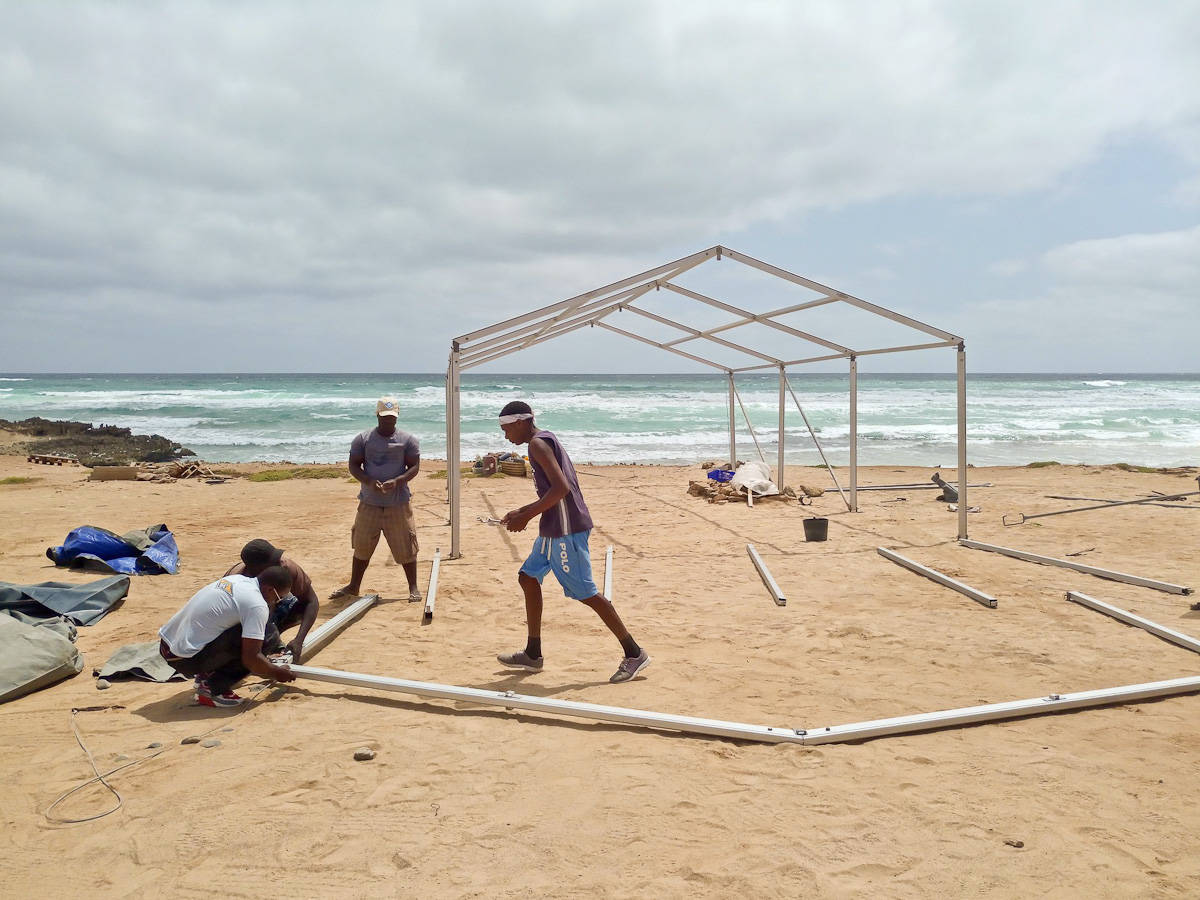 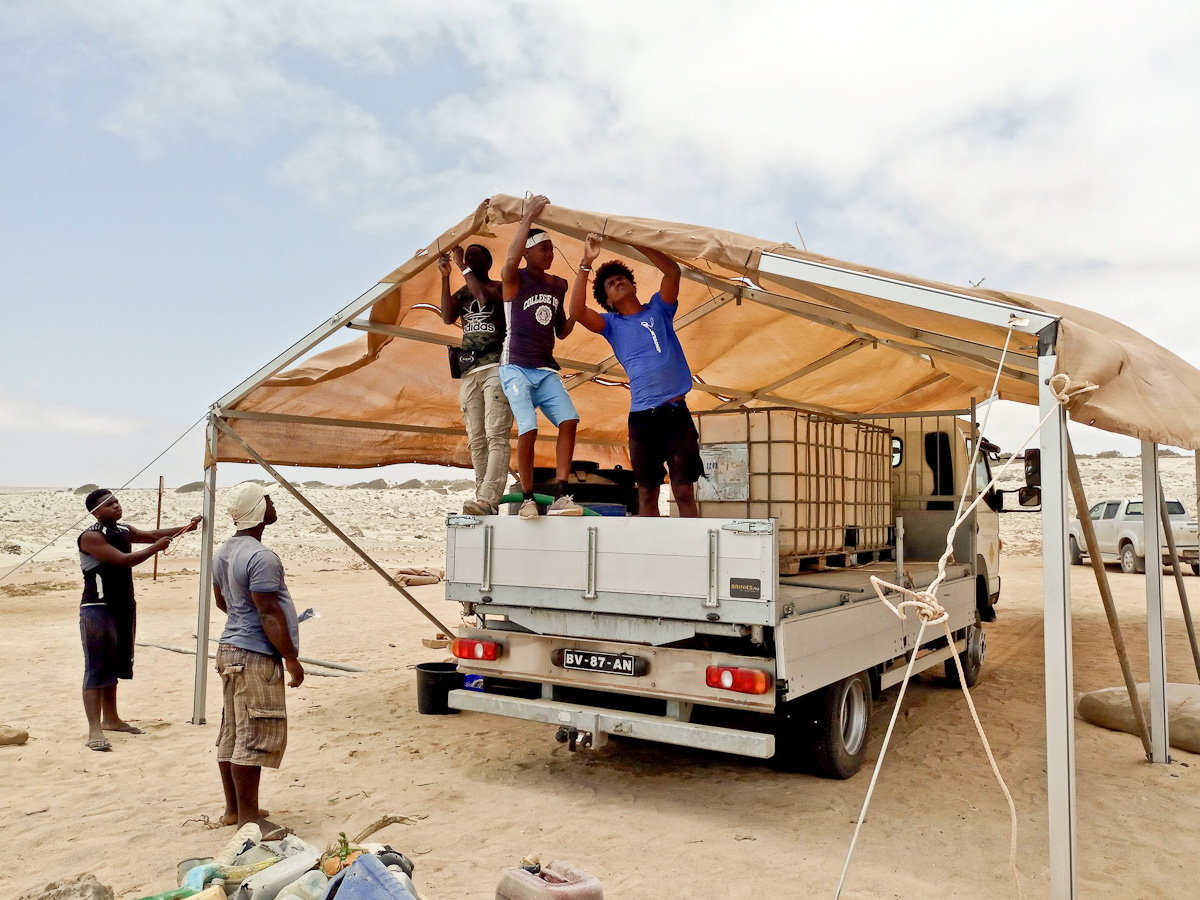 Boa Esperança: The new truck is also very useful for pitching the tents… 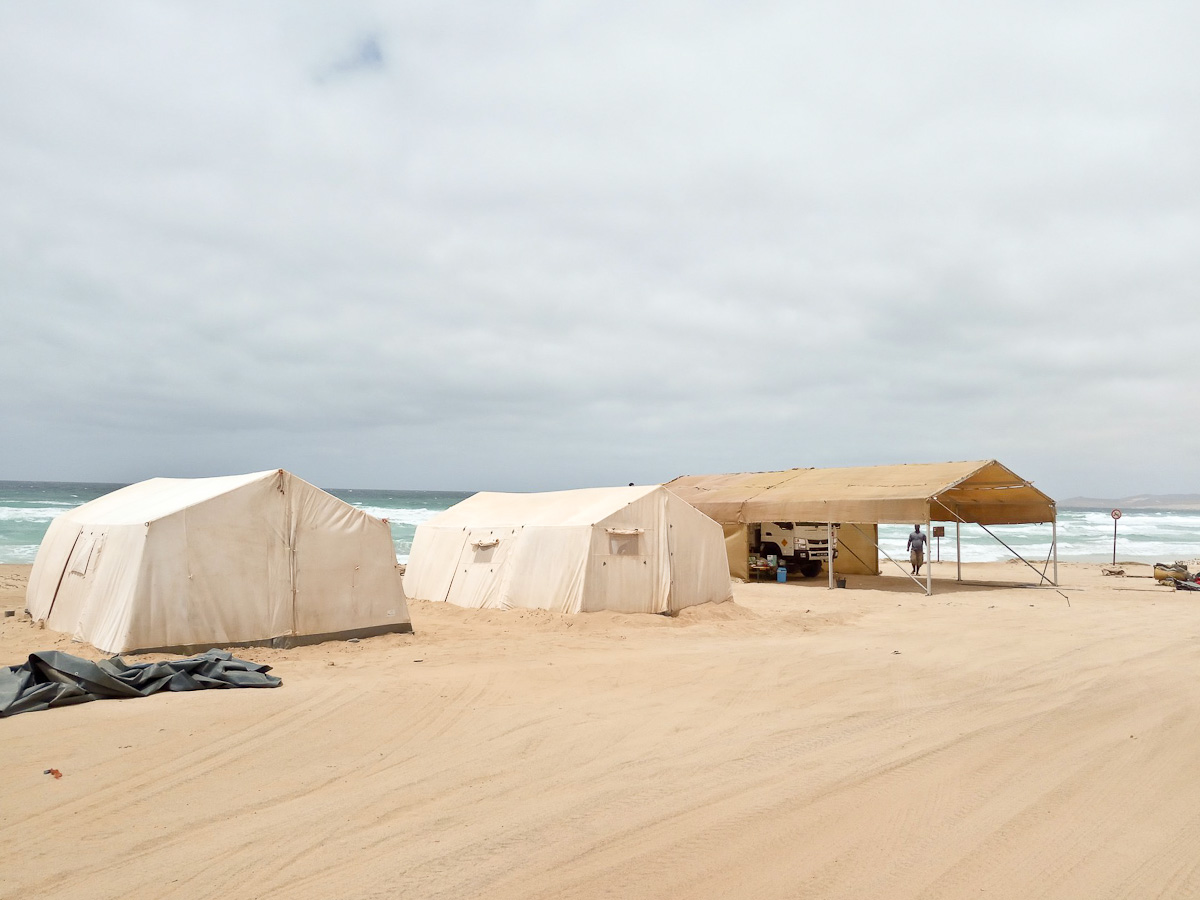 To do: Set up Boa Esperança. Check. 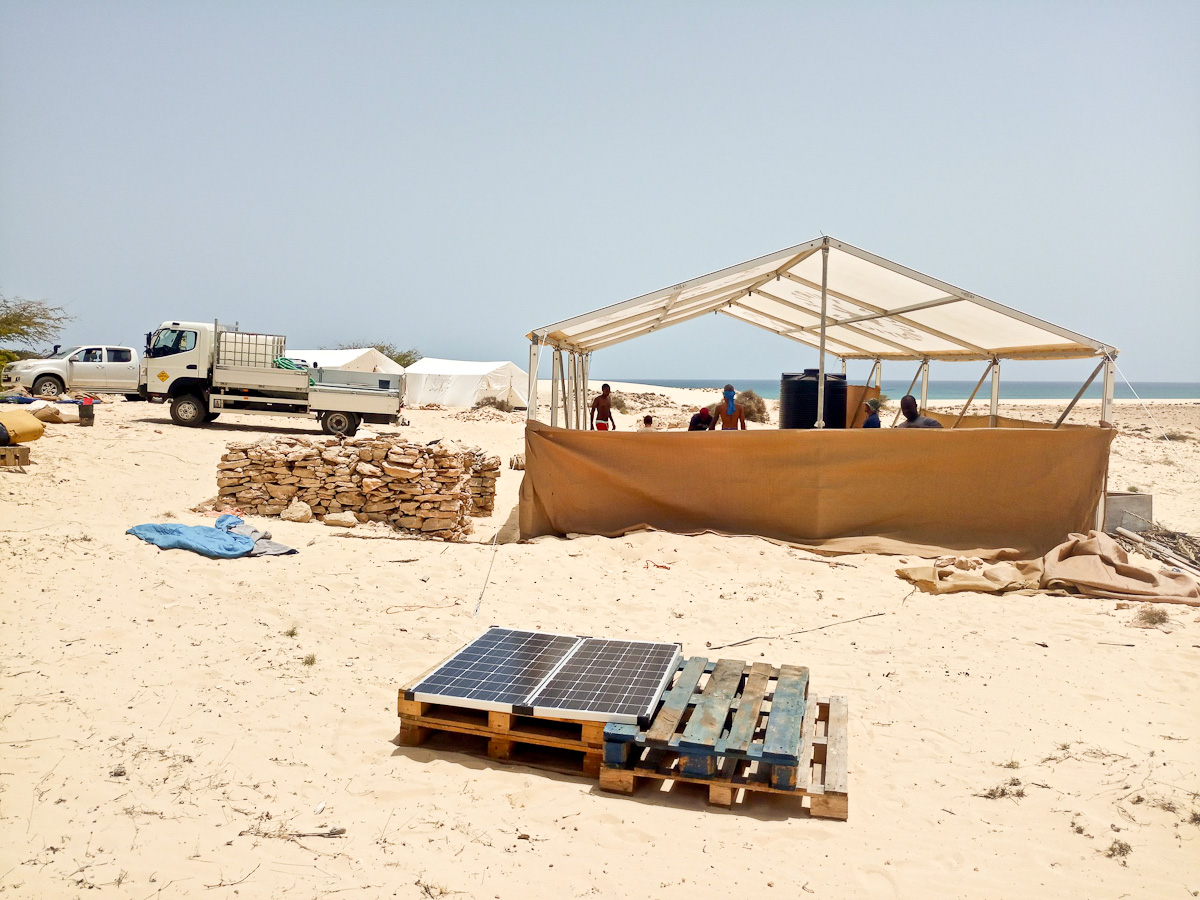 Camp Lacacão: In the foreground the panels of our solar system for power supply 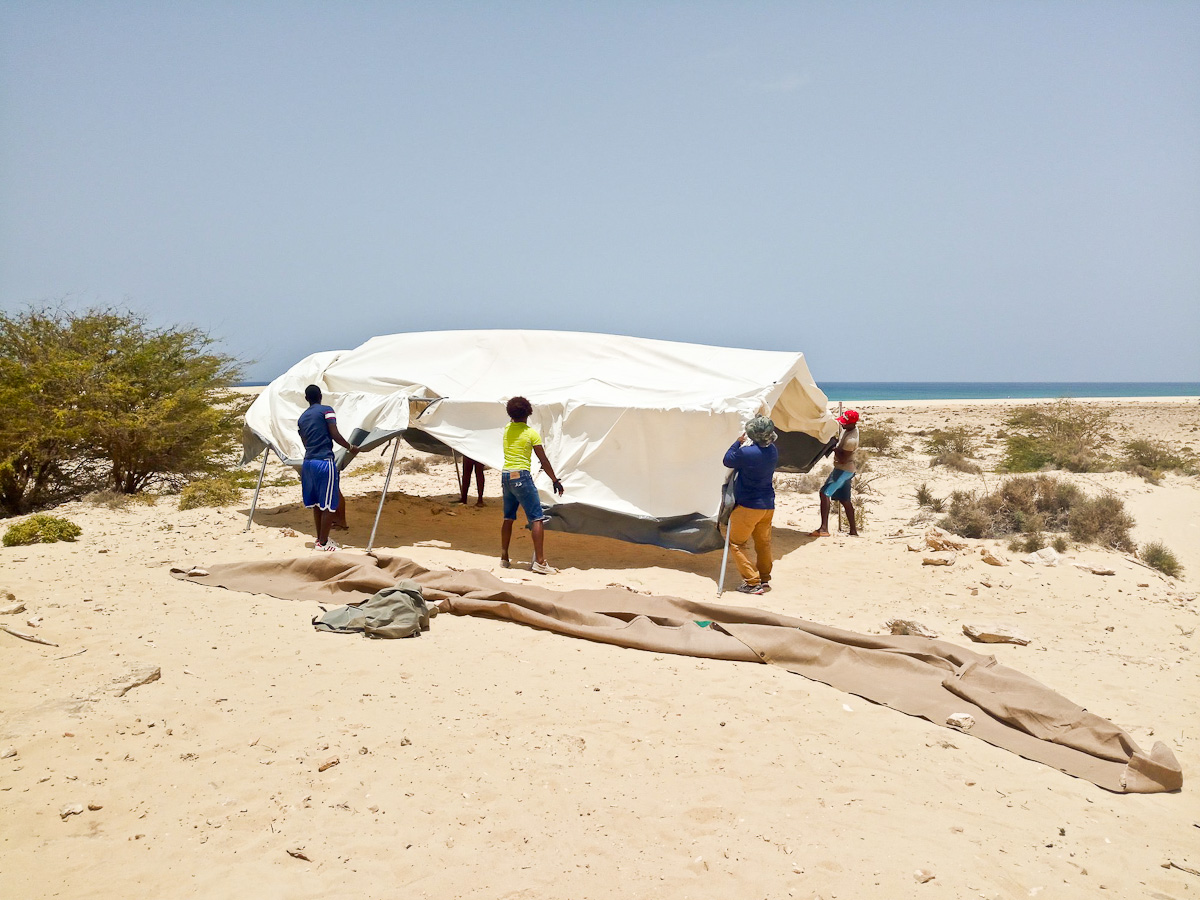 Camp Lacacão: One of the two community tents is covered. 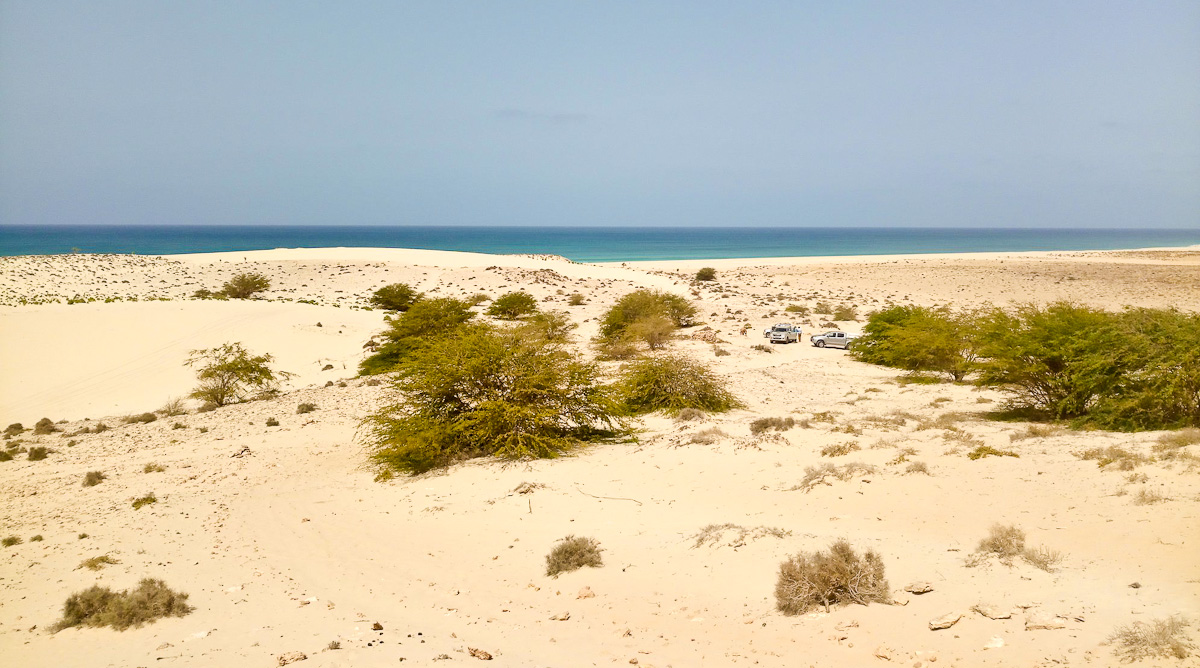 Camp Lacacão: This view alone is worth every effort. The sea turtles will be able to nest here in safety!

Top image: Lacacão: Community tent, this year for the first time with the new logo roof