Sea turtles can weigh up to 2000 pounds and are believed to reach up to 100 years of age. They are elegant and tenacious swimmers. On land, however, they are very ponderous and every move takes a lot of energy. Only the females have to come ashore on a sandy beach from time to time to build a nest and lay their eggs.

Turtles have an incredible sense of direction which the scientists are still unable to fully explain although research suggests that the turtles use the earth magnetic field. At the age of 10-20 years the female turtles hit land for the first time when they return to exactly that beach, where they were born themselves, in order to lay their eggs there. On their journey back to their place of birth they sometimes cover enormous distances and even cross oceans.

A female can be fertilized by several males. Thereafter the female comes ashore usually 3 to 5 times, at intervals of 10 to 15 days, to build a nest and lay about 100 eggs each time. In order to avoid the heat and the dangers of the day turtles usually lay their eggs during the night. Having dragged themselves across the beach they search for a suitable spot and start shoveling a hollow in the sand using their front flippers. Thereafter they dig a hole of up to 27 inches deep by using their rear flippers. This is where the eggs are laid into. Finally the whole nest has to be covered by sand again. After hours of extremely hard work the turtles being close to exhaustion have to crawl back to the sea.

After about 60 days the hatchlings hatch out of their eggs deep in the nest. They wriggle in the sand, which brings them all toward the surface together, and then they all run toward the sea. Only just 2.4 inches long they now encounter the most dangerous period of their life. Many of them are eaten by crabs, birds, octopus and big fish and some die from starvation or illness. Only about one or two out of 1000 hatchlings survive and grow into an adult turtle. However, once fully grown only two enemies are left to the turtles: sharks and Mankind. 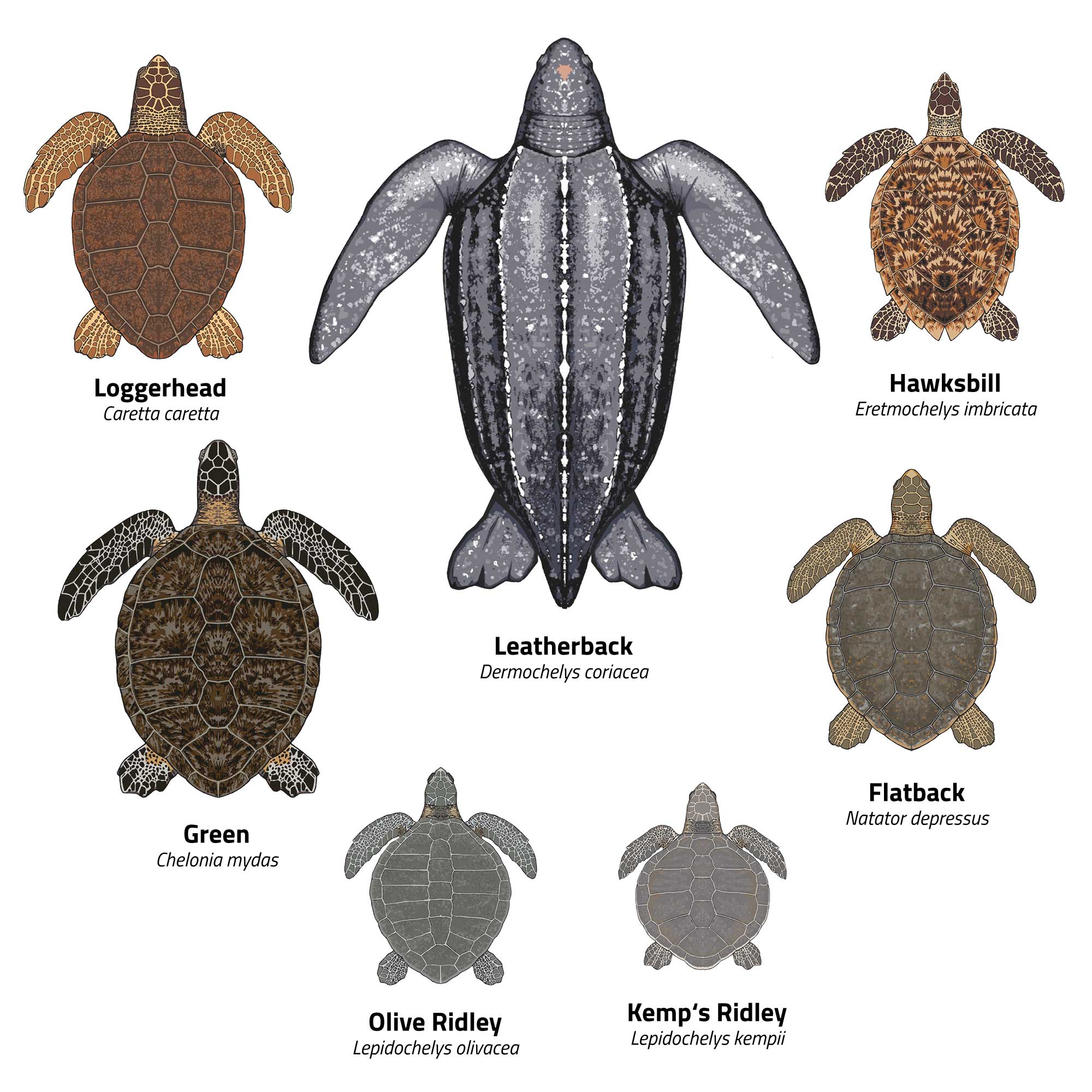 Nearly all species are redlisted by the IUCN (International Union for Conservation of Nature and Natural Resources) as “vulnerable”, “endangered” or “critically endangered”; only for the flatback, which lives only in Australian waters and in the south of New Guinea, the status is unclear since reliable data are currently deficient.

Sea turtle nests are threatened by fungus infections or can be destroyed when washed away on the beach by high waves, which can be produced by strong winds and storms. Many beaches are also threatened by natural erosion or human induced erosion caused by the greenhouse effect.

Even before they are born, marine turtles are eaten by many animals; for example crabs, dogs, cats, birds and many more. Once a young, recently born turtle has made its way into the water, it is still not safe from predators. Sea turtles are a common prey of fish and will remain food for sharks for the rest of their lives, but also for orcas, the large, ocean living mammals; those big hunters are able to bite through the carapace of an adult turtle.

In many countries people dig up sea turtle nests to eat or sell the eggs. Though sea turtles are protected in many parts of the world, they are still hunted for their meat and shells. Sea turtles and their eggs are a delicacy in many places and a lot of money is paid for them.

All species of sea turtles are losing their habitats because of tourism and coastal development; on many beaches where turtles nest, hotels and houses are constructed. Theoretically turtles still can nest on beaches used by people, but in practice they face many problems: coming to lay their eggs at night, sun chairs may block their way onto the beach. Should they succeed to nest, people might walk over them and even put their parasols in the places where nests where laid and thus destroy the eggs. Hatchlings are very sensitive to vibrations (this is one of the factors that causes them to hatch) people walking on top of the nests can cause them to hatch during the day, which elevates the risk of being victims of predators or simply dehydrating in the hot sun.

The tracks which cars and beach vehicles leave might be a mortal trap for sea turtle hatchlings: should they fall into one of those artificial trenches, they can not come out on their own again. When the baby turtles hatch at night they start crawling towards the lightest horizon they see; in natural conditions this would be the ocean´s surface which reflects the light of the atmosphere. Today we find artificial light sources on many beaches; lights of restaurants, bars, hotels and houses distract the hatchlings and they start moving into the wrong direction, towards the artificial lights and might never reach the sea.

Many turtles die in fishing nets as bycatch or are attracted by lures which are set up to catch other fish on longlines. When this happens the turtles get trapped and often tangled up in the fishing gear or even swallows the hook, as a result they can not come back to the surface to breathe and drown.

Like many marine animals, especially mammals, sea turtles are injured by the propellers of motorboats and speedboats.

Generally the pollution of the oceans is increasing and causes many animals to become weaker and more susceptible to disease. In many places a lot of waste is simply dumped into the sea. Sea turtles can become entangled in plastic lines and nets. As many turtles feed on jellyfish, they often confuse plastic bags with their prey and eat them. The plastic can not be digested, accumulates in their bodies, blocks their digestive system and finally kills them. Many dead turtles are found with their intestines full of plastic bags.

Other types of waste can also be dangerous for sea turtles; waste which is washed up on sea shores in big amounts can block a whole area or beach and prevent them from nesting.