On Monday, 29 February 2016, a delegation composed of representatives of Indonesian authorities and NGOs visited the Island of Derawan in the District of Berau to inspect local souvenir shops for illegal turtle shell products. For such souvenirs, numerous critically endangered hawksbill turtles are regularly killed despite that they are protected by Indonesian law. Two shops were found selling bracelets, necklaces, rings, and keyring pendants made from turtle shell. The officers confiscated all pieces they found over the protest of the shop owners and of some Derawan citizens who witnessed the action. The confiscation action on Derawan was extensively reported in the local media.

The illegal hunt for hawksbill turtles is a major problem in the waters of the Derawan archipelago, where since 2000 the Turtle Foundation operates a beach protection project for nesting green turtles. The Island of Derawan is the center for regional and international tourism in the region. There, turtle shell jewelry and even stuffed young hawksbill turtles are openly and bluntly offered in souvenir shops and by street vendors. In order to obtain the carapace scutes, boiling water is poured over the animals, and after the cruel procedure they are thrown back into the sea, often still alive, where they painfully die. 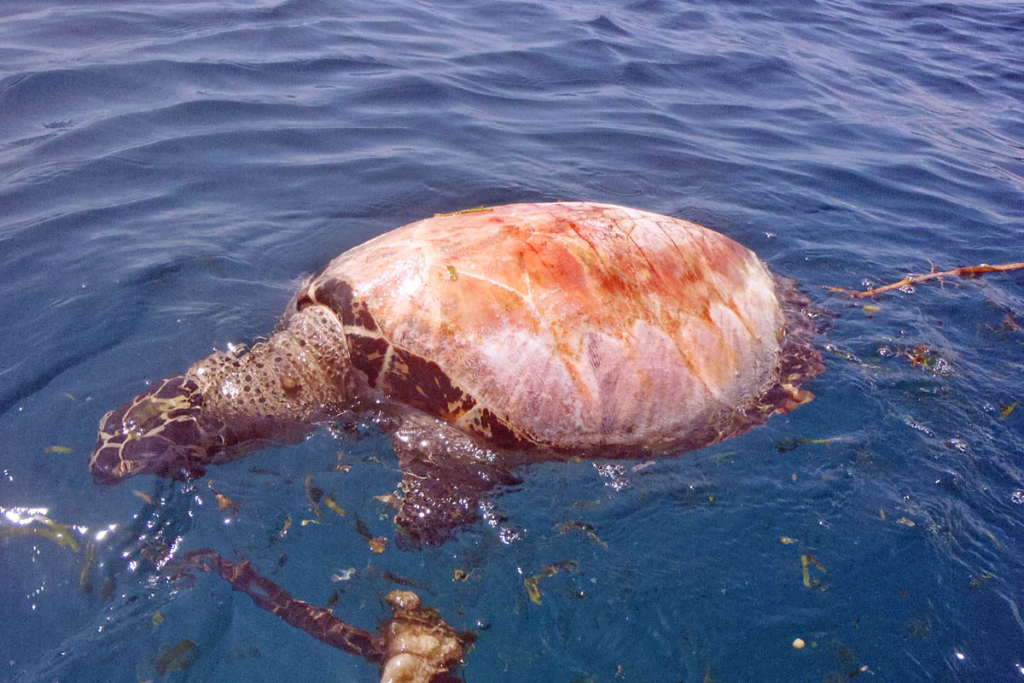 Dead hawksbill turtle floating on the sea. The carapace scutes were peeled off in order to use them for souvenir production. Unfortunately, similar incidents can be seen quite often in the waters of the Derawan archipelago. Image: Hana Svobodová

This is forbidden by law, but until recently the local authorities did not enforce the regulations. Local fishermen already reported a considerable decline of the region’s hawksbill turtle population during the last years, indicating that its extinction is inevitable if no effective protection takes place soon. 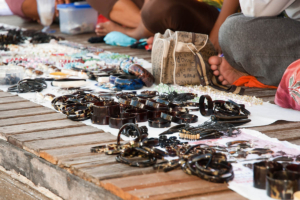 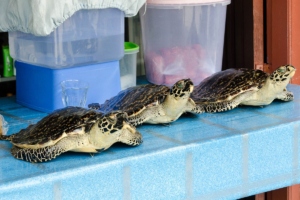 Our outreach activity considering the plight of the Derawan archipelago’s hawksbill turtles led to a joint activity of the Indonesian marine protection agency (BPSPL) Pontianak, the Indonesian Ministry of Maritime Affairs and Fisheries, and the NGOs Turtle Foundation, ProFauna, and Berau Marine Ambassadors (Duta Bahari).

After performing an investigation at shops in the district capital Tanjung Redeb on 28 February, representatives of these organizations visited Derawan and inspected shops and street vendors for turtle shell products. During this time, six out of 29 shops and two street vendors were operating, and in only two shops turtle products were encountered. We suggest that most traders had been informed in advance about the upcoming razzia since we know that normally many more shops are selling turtle shell products on Derawan. However, in these two shops altogether 164 pieces of illegal turtle shell jewelry were confiscated.

The Turtle Foundation recognizes these activities as an important step towards a collaborative effort to save the region’s sea turtles from extinction. Although social measures like environmental education and creating alternative livelihoods, as are carried out by the Turtle Foundation in the Berau district, are indispensable components of a sustainable conservation program, without sufficient law enforcement the problems can not be solved. The market value of the dorsal scutes of one hawksbill turtle nearly equals the monthly salary of an Indonesian worker, and is further multiplied after the raw material is processed into marketable souvenir articles. Thus, the temptation to violate the law for a fast profit remains very high if offenders have no legal consequences to fear. Therefore, sustainable protection of the environment, nature and species can only be achieved by complementing the tasks and activities of governmental authorities and NGOs.