A few days ago we received very sad news. Dozens of people were poisoned after eating the meat of a sea turtle on Sunday, 18 February 2018 during a traditional celebration on the Indonesian Island of Siberut. Three people died of poisoning in the following days. Two of the victims were small children, the third victim an older man. Sixteen more people urgently needed medical care.

Consumption of sea turtles is prohibited in Indonesia, as in most countries, for the protection of these endangered animals. However, this is still practised in many places. Less well known is the fact that the consumption of turtle meat can cause severe, and even fatal, poisoning. This turned to be the fate for the inhabitants of Taileleu village in the south of the Island of Siberut off West Sumatra, who consumed a sea turtle during a festive ceremony, which was hunted the day before in the waters off the island. After eating the meat, people suffered severe symptoms such as dizziness, vomiting, respiratory distress, and severe throat and stomach pain. In the course of the following three days, a two-and-a-half year old girl, a 65-year old man and a four-year old boy passed away. At least 16 more people needed urgent medical help, which was organised by the local health authority “Dinas Kesehatan Mentawai”. Providing medical care is difficult in this remote area, thus, additional help and a doctor arrived days later. According to data from the health authority, at least 95 people were affected by the poisoning. 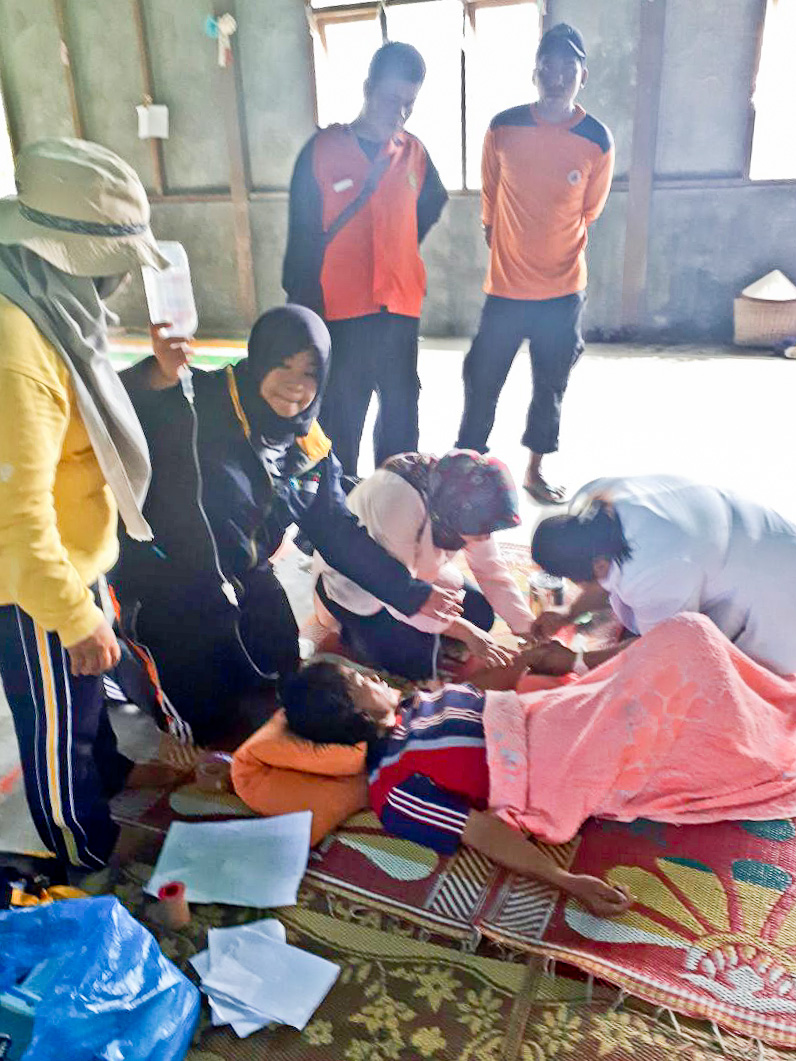 Victims of the mass poisoning by turtle meat are treated in the community hall of Taileleu village. Picture: local health authority

The victims are members of the Mentawai tribe, many of whom still living in a very traditional way on the Mentawai Islands including Siberut off West Sumatra in Indonesia. Sea turtles are consumed by the Mentawai mainly for festive and ritual occasions such as housewarming ceremonies and weddings. In many houses carapaces of killed sea turtles can be found, which are supposed to bring fortune and blessing to the house.

Intoxication by meat from sea turtles is rare, but can lead to very dangerous and sometimes fatal mass poisonings. The disease affects children and elderly or otherwise weakened people the hardest, but also healthy adults are not spared. This phenomenon is scientifically described as “chelonitoxism”. Very little is yet known about its actual causes. Toxins that are absorbed by the turtles through uptake of poisonous algae may play a role. The possibility of poisoning by turtle meat is not completely unknown to the Mentawai on Siberut. Special rituals as well as the previous feeding of turtle meat to pets should prevent becoming ill. Indeed, about 10 cats that had eaten the remains of the meal died in the incident. However, this did not prevent the fatal outbreak of the disease. 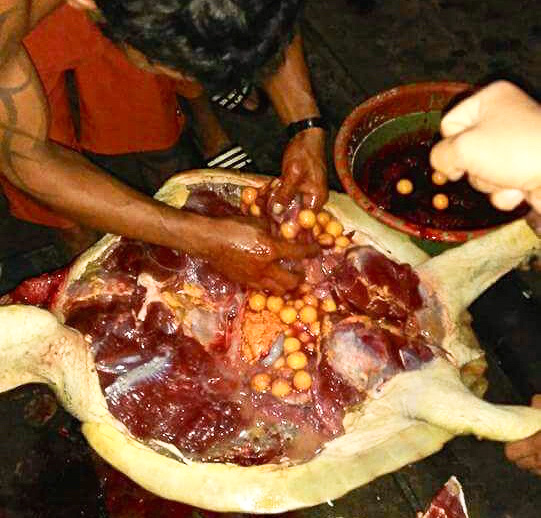 According to a Facebook report from Siberut on 18 February 2018, this is probably the turtle whose consumption caused the mass poisoning. The animal depicted here is a female green sea turtle (Chelonia mydas); the eggs in the abdomen indicate that the animal was about to nest on the beaches of Siberut.

It is particularly tragic in this case that we have just in the middle of 2017 learned through a field study of the particularly frequent consumption of turtle meat in the affected area. Since then, the Turtle Foundation has been exploring ways to conduct awareness campaigns regarding consumption taking up the issues of turtle meat and egg consumption as well as chelonitoxism, which should be conducted in collaboration with local community leaders and authorities. Unfortunately, this will come too late for three people. The present case confirms the urgency of information, education, and awareness activities in the region – not only for the conservation of the threatened sea turtles, but also for the sake of the lives and the health of the people of the Mentawai Islands. We express our deepest sympathy and sincere condolences to the families of the deceased victims and wish the survivors a quick recovery.

Top image: A victim of the poisoning is treated in a health centre in the south of the Mentawai Island of Siberut. Picture: local health authority